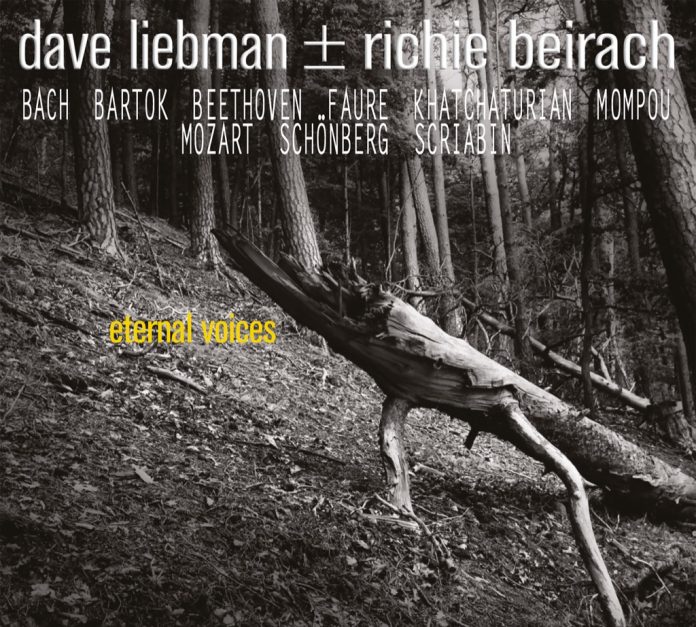 An album for those interested in the junction between contemporary chamber jazz and mainly 20th century Western classical music, with a small helping of baroque, classical and very late romantic. The tracks here are largely arrangements by Beirach and Liebman of the original works, which, with the exception of the Schoenberg piece and the Bartok String Quartets, were piano pieces. It’s an ambitious album, particularly where the interpretations are reductions from the originals written for larger ensembles, but it’s hard to imagine two musicians better equipped to do this.

CD1 gently breaks in the listener with Beirach’s reflective solo piano introduction before Liebman takes the theme, and then the solos ensue. Beethoven’s Piano Sonata No. 30 sounds positively melancholic in Beirach’s hands, as if it’s been transferred to the late 19th or early 20th century via Erik Satie and beyond to jazz. J.S. Bach’s Little Prelude No. 4 also translates nicely to the jazz context, as might be expected, also enjoying the benefit of extended harmony that the jazz context allows.

The album then works its way into the 20th century via a sprinkling of late 19th century. Quite strikingly, with the melody taken by sax, the Mompou sounds as though it could be a modern-day piece of media music, and Faure’s Pavane sounds equally at home in the jazz context. There’s a tune each written by Beirach and Liebman – For Ernst and For Walter, respectively, dedicated to two recently lost close friends.

Around the middle of CD1 and onwards I was hoping for more variety of tempo and rhythmic content, but it didn’t often arrive, which could make it a long disc for all but the most enthused niche listener.

CD2 is devoted entirely to interpretations of Bartok’s String Quartets, track 4 (his String Quartet No.4, 3rd Movement) being a highlight thanks to Beirach’s rhapsodic solo, although generally speaking I’m not so sure that reducing these pieces from four string players to piano and sax is such a great idea. Yes, the piano can cover the harmony that several of the string quartet might provide, and the sax cover the melody, but piano and sax alone are by nature likely to be less interesting in terms of texture than a string quartet. The interpretations here of course have substantial improvised content that the originals lack, but even so, it seems as though these reductions are indeed lesser than the originals.

Michael Tucker - 28 January 2020
The LP and bar code numbers given below reference the four LPs and two compact discs which together constitute the full package of this limited edition rune grammofon release...