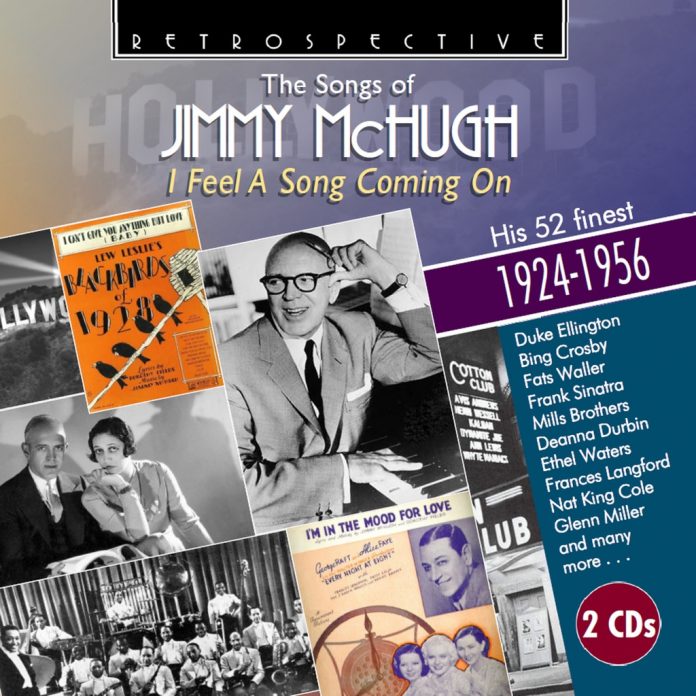 In cricketing terminology Jimmy McHugh has a secure place in the top half of the Second Eleven, thanks to his constant and consistent string of hit songs of the day – 20s, 30s, 40s – that proved to be durable to the extent that titles like On The Sunny Side Of The Street, I’m In The Mood For Love, Don’t Blame Me, Exactly Like You, Let’s Get Lost and I Couldn’t Sleep A Wink Last Night are still being performed and recorded to this day. They’re fine, even if they don’t quite match up to the First Eleven – i.e., Cole Porter, Jerome Kern, Rodgers and Hart.

As it says on the tin the 52 78rpm recordings collected here span the years between 1924 and 1956 and whilst the appeal for me is the original versions of things like Can’t Get Out Of This Mood, “Murder”, He Says and South American Way, I’m more than happy to bet the farm that many JJ readers will be intrigued by the personnel on offer.

Given that the earliest recordings date from 1925 – the last is as late as 1956, a song entitled Too Young To Go Steady, one of four titles from the Broadway show Strip For Action, that were recorded by Nat Cole – the sound quality is surprisingly good and though such an eclectic mixture of songs and singing/playing styles will be hard put to please everyone there will, I feel sure, be many happy memories rekindled by this double CD.

Discography
CD1: I Feel A Song Coming On; I’m In The Mood For Love; When My Sugar Walks Down The Street; Everything Is Hotsy-Totsy Now; I Can’t Believe That You’re In Love With Me; The Baltimore; Harlem River Quiver; I Can’t Give You Anything But Love; Diga Diga Doo; I Must Have That Man; Doin’ The New Low Down; Porgy; Baby!; In A Great Big Way; Futuristic Rhythm; Freeze And Melt; Hot Feet; On The Sunny Side Of The Street; Exactly Like You; Cuban Love Song; Goodbye Blues; Don’t Blame Me; Hey, Young Fella; Dinner At Eight; Lost In A Fog; I’m Living In a Great Big Way (78.16)
CD2: I’m Shooting High; Spreading Rhythm Around; I’ve Got My Fingers Crossed; Lovely Lady; With All My Heart; Where The Lazy River Goes By; There’s Something In The Air; Where Are You; You’re A Sweetheart; I Love To Whistle; My Own; South American Way; Say It; I’d Know You Anywhere; Can’t Get Out Of This Mood; “Murder”, He Says; Let’s Get Lost; Coming In On A Wing And A Prayer; Say A Prayer For The Boys Over There; I Couldn’t Sleep A Wink Last Night; A Lovely Way To Spend An Evening; How Blue The Night; It’s A Most Unusual Day; When You And I Were Young, Maggie, Blues; Too Young To Go Steady, Magnolia’s Wedding Day (78.35)
Frankie Trumbauer, the Coon-Sanders Nighthawks, Duke Ellington, Ben Pollack, Fats Waller, Cliff Edwards, Connee Boswell, Gene Austin, Bing Crosby, Billie Holiday, Dick Haymes, Frank Sinatra, Carmen Miranda, Nat King Cole, Frances Langford and others
Retrospective RTS 4354

John White - 27 May 2021
Norwegian pianist and composer Arne Torvik’s first CD album Northwestern Sounds (2017) featured him leading a sextet through a set of attractive and gentle melodies meant to evoke the...