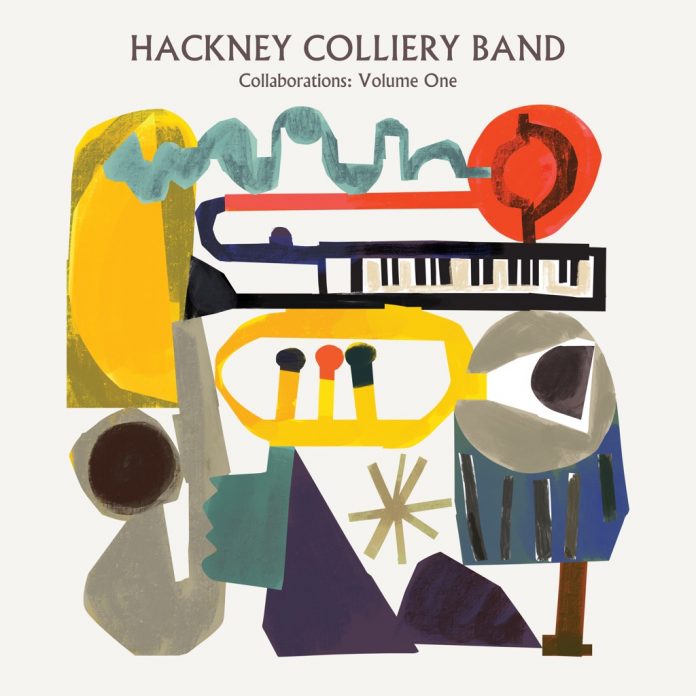 There’s always been a double irony in the 10-year-old Hackney Colliery Band’s name. Coal isn’t mined in many places these days, especially not beneath inner London. And the traditional colliery band, though lacking the additional instrumentation of the HCB, ploughs a nostalgic and often mournful furrow at odds with the extrovert sounds created by the Londoners on record – their eponymous debut album appeared in 2011 – and in live performance. At a stretch, collectivity might be the link between the band and the miners who used to get together to protect their livelihoods. HCB sounds contented in its work at the music face.

The band’s latest album adds collaboration to the collective impulse, and the collectivity is not to be usurped, except perhaps by trombonist Dennis Rollins, whose wittily talkative trombone at the heart of Ricochet is typical and therefore irresistible. As a contrast, James Taylor’s Hammond organ in trumpeter Steve Pretty’s Hypothetical smears the composer’s arrangement with added colour and a layer of acid jazz rather than beeline grooves. The featured piano of Norwegian Bugge Wesseltoft in Snowfire, another Pretty composition and arrangement, initially has a calming influence over the ever-ready beast of HCB, which smoulders in the background until it is up and away in a marching groove, with Wesseltoft’s connivance, towards a brassy ride-out.

Things kick off unexpectedly with the populous Mm Mm, written and performed by the Beninese singer Angélique Kidjo with HCB and the Roundhouse Choir. It’s an antiphonal chart winging in from afar, like some original element of jazz on the way to making its contribution to the origins of the music. By the time Netsanet (the album’s chosen single) is reached, featuring its composer the vibraphonist Mulatu Astatke in an arrangement by HCB percussionist Olly Blackman, the listener is aware that collectivity in jazz seems always to involve energy and high spirits, as though coming together requires that each musician enters already playing, carnival-style. Astatke resurfaces on Derashe, where he also hits and shakes various percussion instruments (on the single he plays a Wurlitzer too).

Drummer Luke Christie writes and arranges two tracks featuring the mordant words and voice of writer-comedian Rob Auton, which lower the temperature while the music runs on the spot or comments solemnly. Christie, Blackman and Pretty produce the album and share most of the composing and arranging, Christie also transcribing Tom Rogerson’s arrangement of his own Crushing Lactic, with its John Adams-type pulse. Vocalist YVA sails through Without You, and alto saxophonist Pete Wareham weaves his beguiling way through What’s Gone Before. A lot of other people are involved in this album, not a surprise considering the multitude of joyful noises they make.

Fred Grand - 10 March 2020
Reviewing Obara’s 2018 ECM debut Unloved was one of the unexpected pleasures of the last decade. Here was an artist steeped in the music of the label’s 70s heyday,...