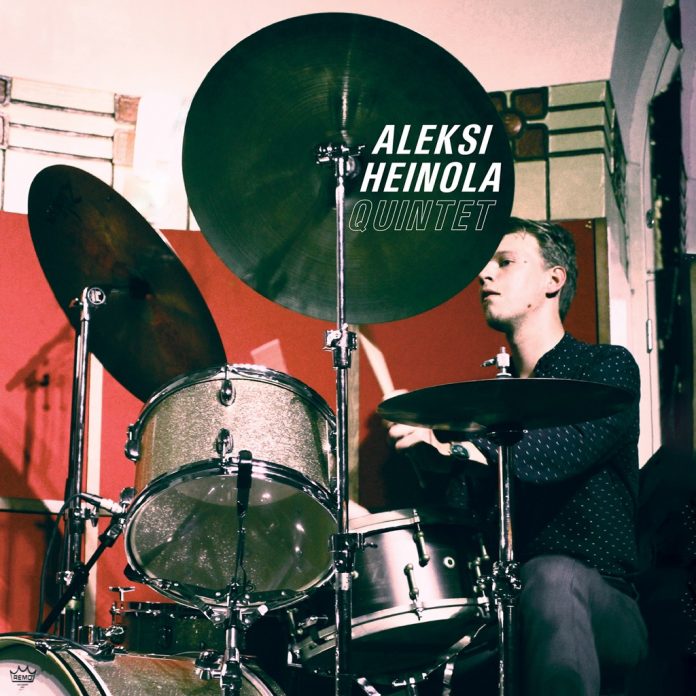 The young Finn had his own trio at age 16 and was eagerly collecting jazz records and expanding his repertoire. Top of his lists were records by Art Blakey’s Messengers and Horace Silver and it is that type of hard hitting, hard swinging, hard bop that is heard on this debut album, released by Jazz Aggression Records from Helsinki.

The opening track Three Fiddy is typical lyrical but hard-blowing bop by all concerned with a fierce tenor sax solo by Dunkel, brassy trumpet from Karjalainen and a brisk, take no prisoners drum solo by the young leader. It swings compulsively from start to finish.

A 12/8 intro starts off Rudy before it settles into a 4/4 groove. Trumpet and tenor sax combine well for a smooth ensemble before we hear more relaxed solo outings from Jacobsson on piano, a stylist with a flowing, melodic touch. Heinola drives hard in the Blakey tradition behind him and subsequently Dunkel on tenor sax and lastly Karjolainen on trumpet. Bossa 69 puts the quintet in samba land, a change of pace for all concerned.

Wives And Lovers is the only standard and is played as a trio selection, Aleksi pressing pianist Mikael Jacobsson to produce some of his best solo work on the album. Silver Blaze is the most obvious and hard hitting Messengers type opus; dedicated to Horace Silver it finds the drummer in commanding form, directing the band from the drum stool, much as his mentor used to do.

Tucked into the sleeve of this LP is a copy of the CD which gives enthusiasts four additional tracks. Bouncin’ At The S.U.P. is another typical hard bopper, medium tempo this time with a lively, bold trumpet contribution from Karjalainen. Twenty minutes of extra music on the CD makes this a good value release, especially considering the quality of the music.

Michael Tucker - 30 July 2019
Every once in a while a record comes along which totally – totally! – confirms one's faith in the surpassing music that is jazz (you know – the music...