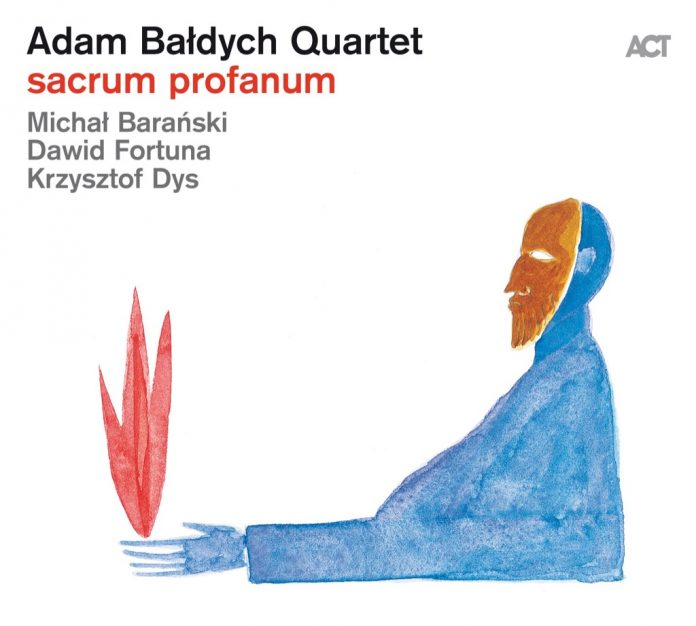 A remarkable and precocious talent, 33-year old Adam Bałdych has been widely feted as the most exciting new jazz violinist to emerge since the 1970s. After a string of superb recordings including two gems with the Helge Lien Trio, it was always going to be interesting to see where he would go next. Lesser artists might have played safe and opted for more of the same, but Bałdych has deliberately stepped back and taken pause for thought.

Featuring a brand new all-Polish quartet, Sacrum Profanum feels like both a logical next step and a significant departure. It takes its inspiration from close to a millennium of sacred music, with five Bałdych originals nestling alongside adaptations of music by Hildegard of Bingen (1098-1179), Thomas Tallis (1505-1585), Gregorio Allegri (1582-1652) and Russian avant-gardist Sofia Gubaidulina (1931-present). Unequivocally a product of the here and now, the music’s mystical roots nevertheless add a tangible emotional impetus.

Tallis’s radically recast Spem In Alium bears strong kinship to the hymnal strain of Tord Gustavsen’s writing, but amidst the contemporary harmonisation Bałdych summons a bygone world of tonal possibilities via his use of Renaissance violin, Gran Cassa and selected orchestral percussion. Bingen’s O Virga Ac Diadema finds the fleet-fingered leader soaring in a superhuman solo flight, while Dys makes an equally telling contribution to the sprightly Profundis. Bałdych’s new pianist again impresses during his rather pensive introduction to Miserere, though it is Gubaidulina’s rubato Concerto which provides the first real sustained angst of the set.

Very different in mood is the unattributed Bogurodzica (13th century), which the mercurial Bałdych uses as a platform for another of his wildly uninhibited creative excursions. The fragile and slightly vulnerable Longing leans heavily on Bałdych’s Eastern European roots, standing in marked contrast to the rollicking post-rock backbeat of Repetition, while the closing Jardin has the simple emotional directness of a classic troubadour’s tale.

Considering that Bałdych was once thrown out of music school for his rebellious tendencies towards improvisation, Sacrum Profanum is an extraordinary piece of work. Successfully reconciling centuries of tradition from an unapologetically contemporary vantage point, this unfaltering set is by some distance his most impressive musical achievement to date.

Dave Gelly - 16 August 2019
By inventing the term “mainstream” in about 1953, the critic Stanley Dance did us all a favour. Mainstream jazz musicians were those who were neither modernists nor revivalists, beboppers...