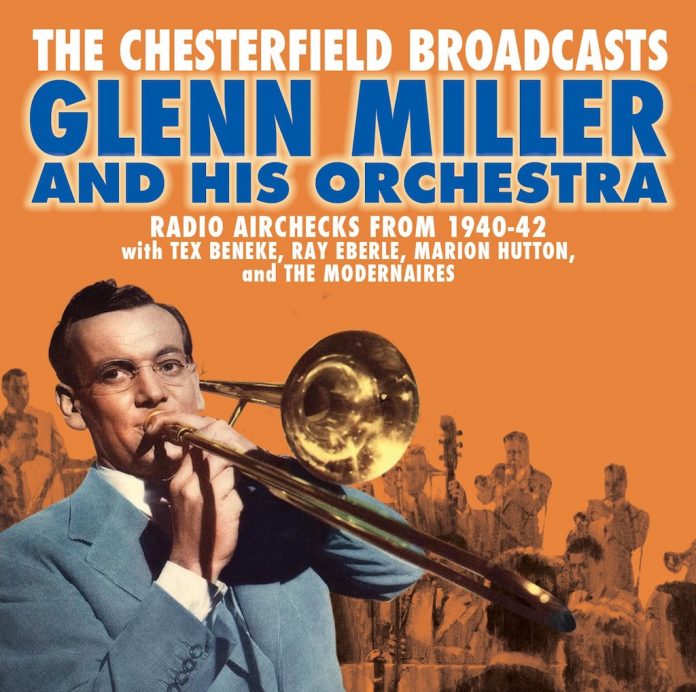 As a touring band the Miller orchestra made its weekly Chesterfield broadcasts from wherever it happened to be, which means that the 22 tracks featured here were broadcast on 19 separate dates from seven locations between April 1940 and August 1942.

Personnel-wise the line-up embraced the bulk of the names familiar from the commercial recordings – Al Klink, Ernie Caceres, Johnny Best, Bobby Hackett, Tex Beneke, Wilbur Schwartz, Trigger Alpert and Mo Purtill, with Marion Hutton, Paula Kelly, Ray Eberle and The Modernaires handling the vocals. The most interesting aspect, for me, is the material: the tried and true – Poor Butterfly, Coquette, Something To Remember You By, Blue Hawaii – is kept to a minimum leaving what amounts to a time-capsule of what people were listening and dancing to in those first years of World War Two.

Although virtually all of them may be described as catchy and/or easy on the ear, only a handful – Amapola, Skylark, I’m Getting Sentimental Over You – have been performed in the last 50 years. Yet some of the titles – The Booglie Wooglie Piggy, Keep An Eye On Your Heart, Do I Worry, Whatcha Know, Joe? – are as evocative as barrage balloons.

Overall, the sound just misses the smoothness of the studio recordings but there are nuggets to be mined if you have any forty-niner in your background. For example, the notes claim that Jerry Gray penned The Spirit Is Willing for Sun Valley Serenade, the first of the two feature films featuring the band. I have trouble swallowing this because (1) Harry Warren and Mack Gordon were contracted by Fox to provide the scores for both Miller vehicles and they wouldn’t have sat still for interpolations and (2) the number is little more than a riff that sounds nothing like Miller.

In 1940 Irving Berlin had a show Louisiana Purchase on Broadway and two of the songs, Fools Fall In Love and It’s A Lovely Day Tomorrow turned out to have legs. Also in the show was a duet, Outside Of That I Love You, which Marion Hutton and Tex Beneke handle well but it’s very much of its time and faded with the show. Billy May weighs in with an original instrumental Harlem Chapel Bells and short-lived vocalist Dorothy Claire is heard on one track only, Bugle Woogie.

It’s a tough call figuring out who will benefit the most from this release – Miller completists or nostalgics although it’s clear that Sepia is targeting both camps. On the whole I enjoyed it and I have no doubt it will find its audience.

Discography
Chicken Reel; Blue Champagne; Medley: Poor Butterfly; The Sky Fell Down; I’m Getting Sentimental Over You; (What Did I Do To Be So) Black And Blue; The Booglie Wooglie Piggy; Something To Remember You By; Long Time No See, Baby; High On A Windy Hill; Yours Is My Heart Alone; Skylark; Outside Of That I Love You; Harlem Chapel Bells; Slumber Song; Whatcha Know, Joe?; Do I Worry?; Keep An Eye On Your Heart; The Spirit Is Willing; Spring Will Be So Sad (When She Comes Around This Year); Delilah; It Was Wonderful Then And It’s Wonderful Now; (I’ve Got Spurs That) Jingle Jangle Jingle; Medley: Coquette; Say It (Over And Over Again); Does Your Heart Beat For Me?; Blue Hawaii; Amapola; Bugle Woogie (68.26)
Miller (tb) with his orchestra plus Ray Eberle, Marion Hutton, Paula Kelly, Dorothy Claire, The Modernaires (v). Various locations – Washington DC, Detroit, New York, Chicago, Los Angeles, 1940-42.
Sepia 1335

Nic Jones - 12 May 2020
Novoa seems to have made a comfortable home for herself in Fresh Sound's new talent roster and this is a good thing as her music, as played here by...