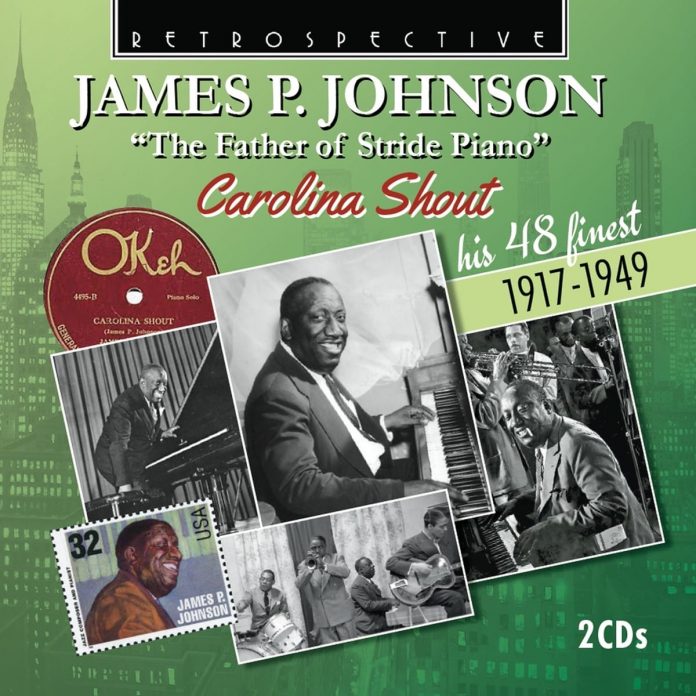 Aged 18, JPJ turned professional in 1912, in the dawn years of the jazz era. Talented and ambitious, with diverse musical interests, he studied classical music theory. Over a glittering career, his accomplishments as pianist, composer and musical director were numerous and impressive. In 1923 he toured England as MD in the review Plantation Days, and back in New York produced his own hit Broadway show Running Wild, which included his most famous composition The Charleston, anthem of the roaring 20s.

In 1928 he premiered his operetta Yamecraw at Carnegie Hall, and in 1929 was  MD for Bessie Smith’s film St Louis Blues. In the 30s his jazz recording career receded somewhat into the shadows as he focused more on “serious” classical composition, with several symphonic works and a stage collaboration with the poet Langston Hughes.

Yet it is as the “father of stride piano” and kindly mentor and inspiration to the adolescent Fats Waller that this modest and likeable man is chiefly remembered. This two-CD set presents a very enjoyable cross-section of his impressive recording legacy – some 55 piano rolls, and over 400 recordings. Twenty-three of the 48 tracks, spanning 1947-49, were composed by Johnson himself.

The young Johnson had honed his skills in Manhattan’s tough piano bars and sporting houses (known as The Jungle) and in the popular rent parties of pre-20s Harlem. Here he rubbed shoulders with the very competitive and dandified “ticklers” of the day – highly skilled professional pianists who specialised in showcase exhibitions, and indeed contests, such as Willie “The Lion” Smith, Luckey Roberts and Eubie Blake. In this context “stride” piano style developed and flourished, with a two-handed muscular and supple rhythmic drive which massaged the jerky syncopation of classic ragtime into a more flowing, dynamic and diverse approach, leading to future further development via Hines, Waller, Wilson and Tatum, and still surviving and flourishing.

The opening track, Johnson’s masterpiece Carolina Shout, exemplifies his stride style at its striking peak, packed with audacious cross and interrupted rhythms and infectious invention. Over The Bars (Steeple Chase Rag) a piano roll from 1917, paints a clever picture in sound of an exhilarating horse race, demonstrating his skills as composer and arranger. A further facet of his talent can be heard in his magnificently responsive and supportive accompaniment to Bessie Smith in Backwater Blues (1927). Fine solo versions of his own compositions illustrate his sparkling keyboard mastery- Snowy Morning Blues, Riffs, You’ve Got To Be Modernistic and Jingles.

By CD2, covering 1943-49, Johmson had returned to more widespread jazz recording, signing a contract with Blue Note in 1943. He still had much to offer. There are fine solo tracks here – If Dreams Come True (upbeat stride), Keep Off The Grass (a revisit to his first known recording in 1921) and a sparkling interpretation of Lisa. He also features, always colourful and rock-steady, in various star ensembles of the day, with cherishable contributions, in particular from Sidney De Paris, Vic Dickenson, Ben Webster and Sidney Bechet (in the appropriate closer, September Song, from 1949).

Johnson suffered a severe stroke in 1951, remaining inactive until his death in 1955. Famous enough once to be honoured on a US postage stamp, he deserves higher recognition today. This very welcome CD tribute, with full and informative notes by Digby Fairweather, is a reminder of his important and innovative contribution to the development of jazz piano and should help.

Elliot Marlow-Stevens - 28 October 2021
Guitarists Larry Carlton and Paul Brown both have many credits to their name, Carlton of course having been one of the key guitarists on several of Steely Dan’s most...