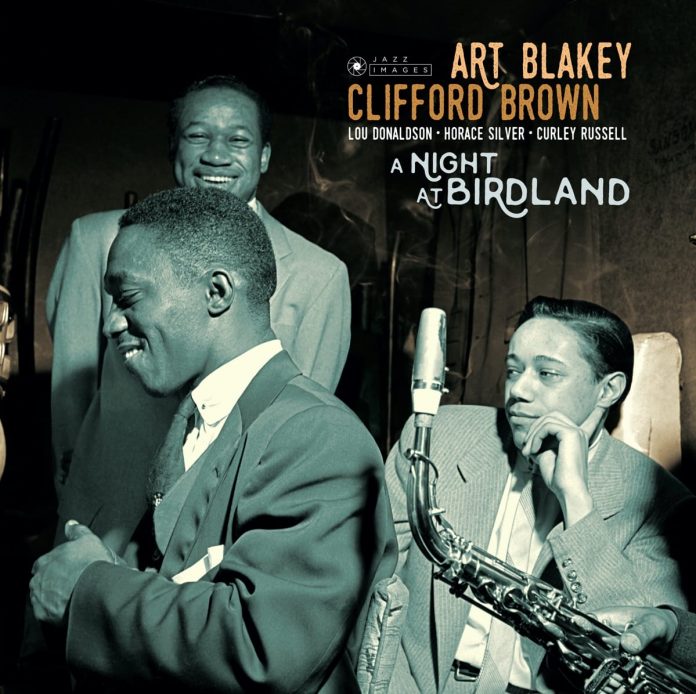 Originally recorded and issued by Blue Note as by the Art Blakey Quintet, this talent-laden group was really the start of the Jazz Messengers before they were invented. Blakey had put together a strong, talented group for an engagement at Birdland, probably well aware that he couldn’t keep them together long. Clifford Brown’s easy, ceaseless invention on these tracks indicates why he was referred to here as “the new trumpet sensation”.

The introductions come from Pee Wee Marquette, a short-in-stature, cross-dressing master of ceremonies who, it is reported, required a tip from all musicians who played at Birdland and if they refused, he would mispronounce their names from the bandstand. Not surprising perhaps that Lester Young referred to him as “half a motherfucker”. Marquette introduces the band as “Art Blakey and his wonderful group”, so Art must have tipped him generously.

These sides are tremendously important, as listening to them we hear the new hard-bop style being put together almost as it was being invented. Horace Silver opted for short, percussive but melodic lines rather than the dense harmonic style introduced by Bud Powell. Blakey elevated the drums to the level of a front-line instrument, swapping phrases with trumpet and alto and driving the band forward relentlessly. Blues based, ferocious but lyrical in a hard-nosed way, this music was at once simplified and made very expressive.

It was a supergroup of its day: Clifford Brown and Lou Donaldson were top modern soloists, Silver was beginning to make a name for himself, and Russell had made his name playing in bands led by Charlie Parker and Tadd Dameron. The music played was by Charlie Parker and Dizzy Gillespie, with new, rousing charts by Silver. His Split Kick and later Quicksilver have fleet, flowing trumpet solos by Brown and some typical Parker-inspired alto lines from Donaldson.

In complete contrast, Brown’s solo feature Once In A While shows him producing wonderfully inventive improvised variations on this standard tune. Donaldson does very well in a similar ballad mood on If I Had You.

Mostly though, this music is about high-powered solos delivered in a maelstrom of rhythmic momentum, fuelled by Silver’s piano, Russell’s mobile bass and Blakey’s relentless drums. It set a blueprint for the future that was expanded and developed by the future Messengers, the Clifford Brown/Max Roach combo and many others that followed on. At the time of writing, Lou Donaldson, aged 94, is the only survivor of this landmark band.

This two-record vinyl set offers first-class sound on 180g vinyl and an attractive gatefold cover with Francis Wolff’s original photos from Birdland. I should point out though that the CD version (Jazz Images 38119) offers four extra tracks of the same quality and enthusiasts who do not have it might well want all the music from this historic session.

Matthew Wright - 07 February 2022
Slightly outside our usual releases, this mixes the expressive approach of tango and elements of improvisation within the usual strictures of composition and arrangement to which the Argentinian dance...