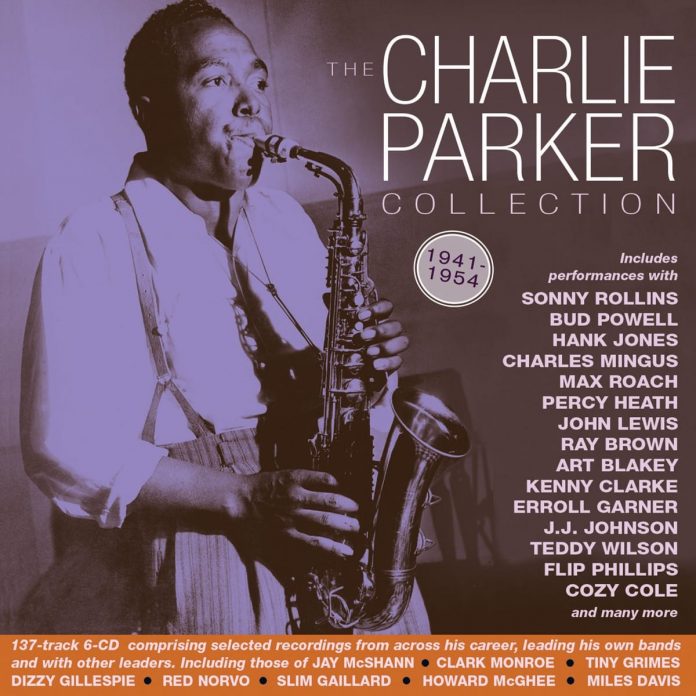 This is a selection of Parker recordings from 1941 until his last in 1954 but despite filling six CDs with 137 tracks it doesn’t get close to a full collection of his recorded work.

Acrobat have concentrated on the studio tracks with just two exceptions. One is a blazing workout on Perdido at Birdland in 1950 with Fats Navarro on trumpet virtually matching Parker for invention in his solo. Parker too is flying high, unimpeded by a studio clock and red light and producing the sort of headlong improvised choruses he could always play in front of an attentive audience. There is also a track recorded by Clark Monroe’s band at his Uptown House in 1942.

The set begins with Hootie Blues from 1941 with the Jay McShann band and Parker playing a rousing bop solo as though he’d been doing them for years. Tiny’s Tempo and Red Cross are from Parker’s first recordings for Savoy in 1944 with an unsuitable combo featuring guitarist Tiny Grimes.

The rest of CD1 has selections from Parker’s Dial and Savoy sessions and some with a Dizzy Gillespie unit recorded for the Guild label. Two pieces here and one on CD2 are with the Slim Gaillard Septet. CD1 has Parker’s first great classics for Savoy – Billie’s Bounce, Now’s The Time, Koko and Thriving From a Riff. CD2 has music from the 1945-1947 Dial and Savoy discs. The Dial version of Ornithology and A Night In Tunisia are particularly worth a close listen. It also includes the session with Miles Davis under his leadership where Parker played tenor sax. The version of Lover Man was not Bird’s finest, but he had just consumed a quart of whisky and had to be held up to play it.

By the time you get to CD3 it’s obvious that Parker’s distinctive vocabulary never failed him. Apart from a few quotes from popular songs of the day and some blues licks it’s all bebop, his interpretations enhancing even the best of the composers of the day like Irving Berlin and Gershwin. Listen to these versions of Embraceable You, My Old Flame and Out Of Nowhere for examples. This disc is all Dial or Savoy music presented here in the order of first release.

CD4 has more Parker classic recordings such as Parker’s Mood, some Afro-Cuban tracks with Machito’s orchestra and his first with-strings session. Six selections were made for Mercury in 1950 with a line up including Dizzy Gillespie, Thelonious Monk and Buddy Rich and it worked wonderfully; these tunes are some of the most disciplined and well constructed in the collection.

CD5 has a selection of with-strings tracks along with some sturdy quartet songs with Hank Jones and Max Roach in support and a lively blues called Compulsion for Prestige where Parker teams up with Sonny Rollins (both men on tenor sax), Percy Heath and Philly Joe Jones in 1953.

On CD6 Night And Day and Almost Like Being In Love are big-band pieces where Parker sails above a large orchestra, his solos buzzing with original lines in company with the unlikely rhythm section of Oscar Peterson, Ray Brown, Freddie Green and Don Lamond. Sometimes you get the impression that Parker could have played bop solos over the ODJB and still sounded great – and in the right place.

Some of the best of the quartet work comes towards the end of this last CD with a group featuring Walter Bishop Jnr, Teddy Kotick and Roy Haynes. These sound as if they were recorded yesterday, helped by a much better recording. Today’s hard boppers play in this style without the fierce drive and imaginative improvising heard on these discs. Much the same goes for the final two tracks from December 1954, with Art Taylor replacing Haynes.

In the unlikely event that you are a jazz enthusiast with only a few Parker discs, this is for you. The high-quality transfers and extensive notes make this a good bet also for those who find this collection offers a few titles they don’t have at present.

Andy Hamilton - 02 May 2021
Even those who regard jazz as an essentially American artform must allow that world-class jazz is produced around the world. That surely includes London – but Newcastle-Upon-Tyne? If you...