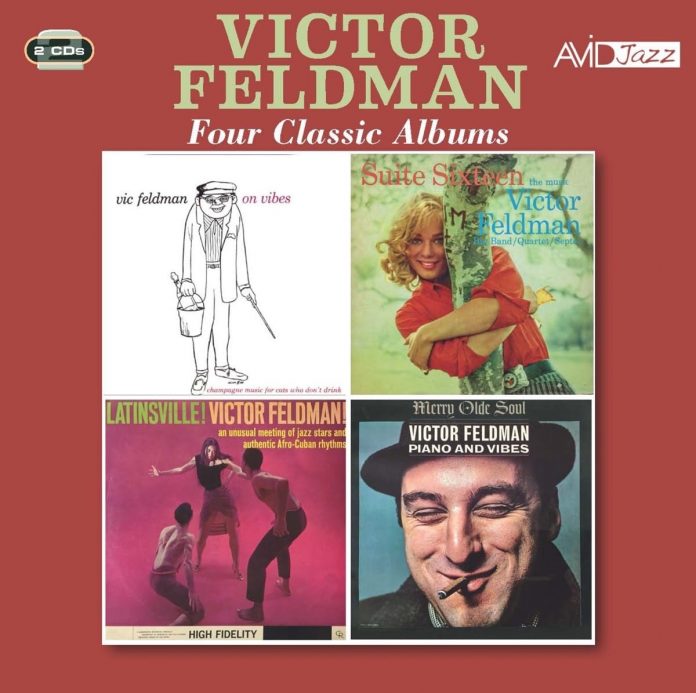 Despite his many claims to fame, not least composing Seven Steps To Heaven and providing luminous support to some of Joni Mitchell’s most perfect albums, Victor Feldman’s skills as a band leader are not that well appreciated. Perhaps this is because he emigrated to the USA in autumn 1955 and was thus largely lost to view as he made his name as a session musician with everyone from Cannonball Adderley to BB King and numerous rock and pop musicians; perhaps it’s because he was labelled as “a miscellaneous musician” (as Samuel Chell remarked on the All About Jazz website in 2009), playing piano, congas and drums as well as vibes; perhaps it’s because he was just too versatile, too good at what he did, too easy to take for granted. These four albums provide the evidence for why we need to praise him more.

On Vibes – subtitled “Champagne Music For Cats Who Don’t Drink” and once reissued as Mallets A Fore Thought with a cover photo of two mallets hitting the ribcage of a skeleton! – is a relaxed and enjoyable light bop date. The vibes are always to the fore, the rhythm section always supportive but never intrusive, and Frank Rosolino and Harold Land join in for the last three tracks to provide some edge to proceedings. Both Bass Reflex and the opening Fidelius cleverly stop-start in the usual Feldman style. Easy listening this set might be, but cats can and should drink champagne while listening.

Suite Sixteen is far a more adventurous affair, a series of septet and big-band pieces recorded in London just months before Feldman decamped to America. Trumpeters Jimmy Deuchar and a 26-year-old Dizzy Reece stand out, Reece in particular for his rumbustious composition Maenya, as does Tubby Hayes in partnership with Ronnie Scott. Brawl For All gives us an opportunity to hear Feldman’s distinctively Monkish piano. Centrepiece of the set is the four-part title track, a suite for quartet written by Tony Crombie, who alternates on piano with Tommy Pollard, alongside Feldman on vibes, Eric Peter on bass and an uncredited drummer, probably Phil Seaman. Two quiet sections with Crombie on piano bookend the more rumbustious central pair with Tommy Pollard, but added together they form a coherent, and substantial whole. Feldman was only 21 when he recorded this set, his second ever album, an extraordinary achievement of performance, arrangement and in four instances, composition, given the far more experienced musicians he was up against in the studio.

Latinsville! first appeared on the Contemporary label, its cross-pollination of jazz and Afro-Cuban and Brazilian music, while not quite in the Getz/Gilberto league, making it nonetheless a largely forgotten little gem. The line-up is wonderful, including bassist Scott LaFaro on six tracks, a great trumpet and trombone frontline in Conte Candoli and Frank Rosolino, and a powerhouse percussion outfit. Some of it is lightweight froth, but Flying Down To Rio is surprisingly stately, Poinciana an exuberant outing for tenorist Walter Benton and pianist Vince Guaraldi, and the percussion groove on In A Little Spanish Town is just perfect. A bold experiment, and worth revisiting.

Merry Olde Soul is the most traditional of these four sets, a straightahead quartet swinger that originally appeared on Riverside. Feldman splits duties between vibes and piano, Hank Jones replacing him on piano on three tracks. What stands out is the interesting choice of songs: three of the five standards are not that familiar, while the leader contributes four of his own compositions. The album’s title references Old King Cole, but it could be the young Nat who Feldman has in mind, for this is a classy and stylish set.

In total, Feldman recorded 29 albums between 1948 and 1985, of which these four are among the earliest. They make a collectively good case for remembering Feldman as a masterly British musician.

Fred Grand - 28 March 2019
The Wasserfuhr brothers have a knack for finding musical inspiration in people and places. This set was recorded during their recent sojourn on the Emerald Isle. They dispense with a...

Keyna Wilkins: So What Bach – Six Piano Jams On Bach...