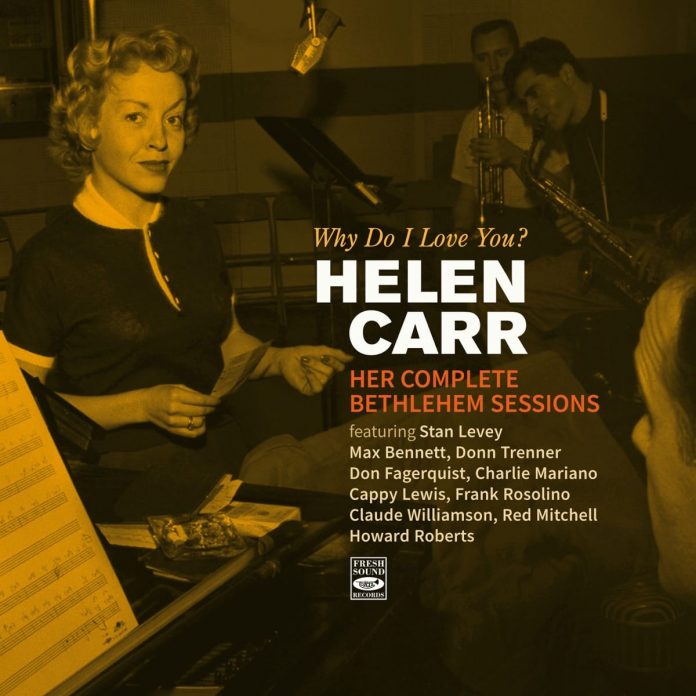 Helen Carr was arguably the most enigmatic performer in the annals of pre-1960s popular music – so much so that one struggles to find two people who agree on her date and place of birth. Currently 1922 and Salt Lake City are leading the field.

All we can say for certain is that in 1955 she recorded and released two long-playing vinyl albums on the Bethlehem label – Down In The Depths On The 90th Floor, and Why Do I Love You? Now Fresh Sound have released in one package what looks like just about everything she recorded in her relatively short life – cancer claimed her at only 37. That’s the two Bethlehem albums plus a half dozen singles.

The first thing we notice is the calibre of her backing. She actually sang – though did not record – with bands including those of Charlie Barnet, Bud Morrow and Stan Kenton.

Although this CD boasts only 26 tracks they are a truly eclectic mix and will cause serious delight amongst students of popular song, never mind the presence of leading jazz players. The lead-off number, Not Mine, was written by Victor Schertzinger and Johnny Mercer for the Paramount movie The Fleet’s In, which boasted two standards – I Remember You and Tangerine – in addition to the title song and Arthur Murray Taught Me Dancing In A Hurry.

This is followed by another Schertzinger entry, the classy I Don’t Want To Cry Anymore, from 1940. Tulip Or Turnip is, believe it or not, from the pen of Duke Ellington with a lyric by Don George whilst Got A Date With An Angel reeks of its era and could only have been written at that particular time.

Whilst Carr has a half-decent set of pipes she maybe has no respect for a lyric or is creative. Time and again she substitutes her own words for those of the lyricist, notably in Porter’s Down In The Depths, in which she persists in singing the nonsensical “down on the depths”, plus substituting her own common plural nouns “restaurants” and “nightclubs” for Porter’s singular proper. Despite these caveats I enjoyed the album and will certainly return to it in the weeks to come.

Fred Grand - 10 July 2022
Portuguese bassist Hugo Carvalhais (b. 1978) represents something quite rare in today’s music. Each new release is so infrequent that it seems to assume the significance of a passing...

Jazz Journal - 31 December 2021
This straightahead outing stands in contrast to Thomas's more adventurous and innovative pro­grammes of originals, and it was momentarily surprising to dis­cover that it has sold well in excess...