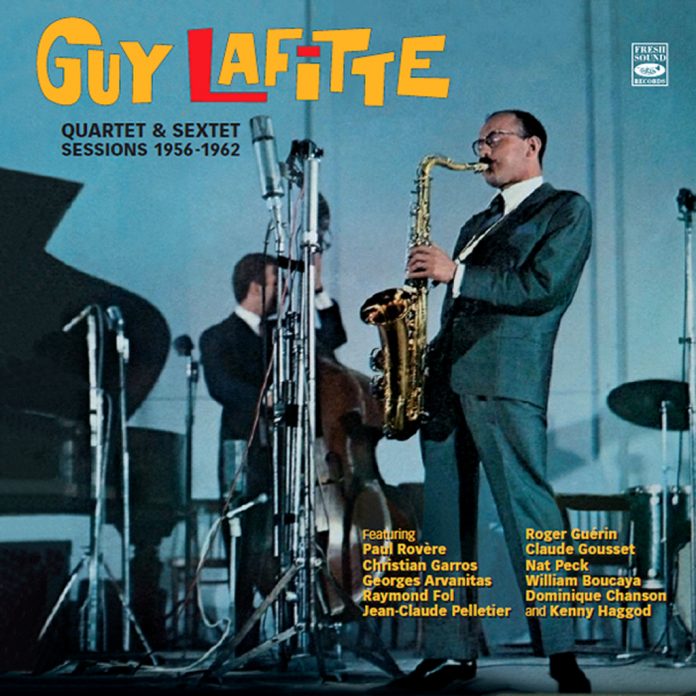 Monsieur Lafitte was a master. In effect, I would rank him with Chu Berry and Don Byas. I say in effect because, although his sense of form, eloquence on the horn and beautiful tone are a match for Byas and Berry, he was a primitive. He never learned to read music. If I know the number, I know my place, where I play with the other musicians.

Like Django, he began his career playing with gypsies. They were Spanish – they are different you know. Although Guy was house-trained and Django wasn’t, they had their skills in common, and Guy should rank with the very top musicians who came out of France fully equipped to improvise and swing at a time when our musicians were writhing incoherently over British rhythm sections that had the bounce and lift of Westminister Abbey.

Although first influenced by Louis, Guy is most palpably a Coleman Hawkins disciple, using all the elements of Hawk’s style in his own voice. Hawk burgeons through these tracks, but there’s a particularly good sample in the fine Le Chat Qui Dort, which also serves as a yardstick for the sextet.

It’s listed as by the quartet, but there is a great blues solo from a trombonist, probably Claude Gusset (there is also a good trombonist, unlisted on the [5] sides) as well as some gentle instrumental vocalising from Hagood, who intones a strange Body And Soul. Kenny has a crack at Billy Eckstine’s Lonesome Lover Blues, but men-from-boys comes to mind and Mr B has nothing to fear. There’s a good bluster solo from Guy, though and muscular piano from Raymond Fol.

The French pianists are particularly fine, and Roger Guérin, a tasteful trumpeter who sounds as though he’s holding in his bop instincts, only emerges to tantalise. Lafitte rhapsodises beautifully on the ballads, notably It Might As Well Be Spring.

Derek Ansell - 05 January 2020
This is a real gem for anybody who loves straightahead early bop. Bobby Jasper was one of the many great talents in the music who left us far too...