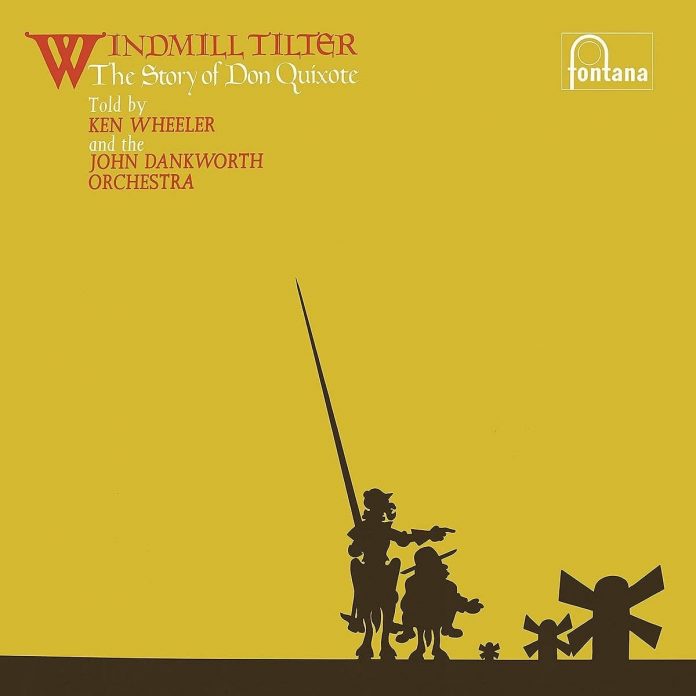 Dankworth was so impressed by Kenny Wheeler that he invited him to write music for an LP as he liked on a subject of his own choosing. Wheeler came up with the story of Don Quixote and here he plays reflective flugelhorn on seven compositions telling his version of the famous story.

His solos throughout are varied and fascinating, different to each other but all retaining a feeling of melancholy suitable to the tale. He gets a fat, mellow sound from the flugelhorn which is all his own and blends it in skilfully with the big orchestra.

The opening Preamble is tentative but he opens up impressively on the following tracks, Sweet Dulcinea Blue and Batchelor Sam. Although the flugel is featured on each selection there is plenty more to listen to here. John Dankworth’s alto sax solos are in the Parker bop tradition, but he has a reflective and at times refined tone which says more about British music colleges than it does 52nd Street in New York. Dankworth was an original alto stylist though and none the worse for that.

There are strong contributions too from guitarist John McLaughlin and bassist Dave Holland. The latter had just been working with the Miles Davis band. Vibes man Tristan Fry joins drummer John Spooner in what turns out to be a fiery and swinging rhythm section.

The main focus of attention is rightly on Wheeler’s sombre, moving solos but the orchestra provides a scorching set of performances of then-modern big-band jazz. The use of tuba in the ensemble fills out the rhythm, giving it depth, and adds to the overall orchestral sound effectively. It never sounds like the brooding Gil Evans orchestra of those times but reminds us of it in the instrumentation and the uses made of it.

Thoughtfully crafted flugelhorn outings and solos by McLaughlin, Dankworth and Tony Coe all combine to make this a fascinating exercise in modern big-band jazz of the late 1960s.

Ian Lomax - 06 June 2021
Tower Of Power. What a band and what a name! Founded in 1968 by saxophonists Emilio Castillo and Stephen “Doc” Kupka, the band were originally named The Motowns. It...

Dagobert Böhm: Within A Dream