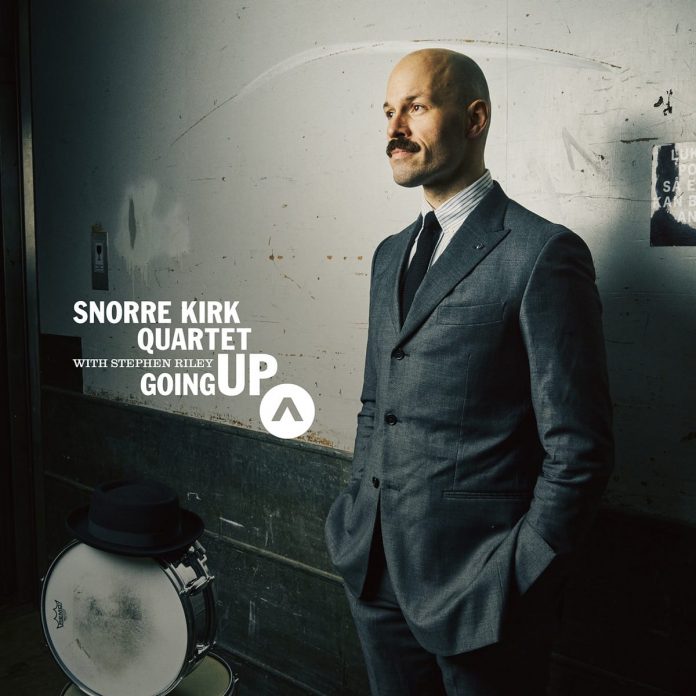 When I first heard that Snorre Kirk was releasing another album with Stephen Riley after the success brought by Tangerine Rhapsody, I knew that something special was due. Unlike most Scandinavian jazz, Kirk’s sound centres around traditional jazz that swings hard.

Going Up is his sixth album and has the same lineup as his previous release back in 2019. It comprises entirely original compositions by Kirk that amalgamate a variety of styles and inspirations.

The album begins with a track titled Right On Time, a simple tune both melodically and harmonically, which abruptly changes key opening into solos. Next up is Streamline, appropriately named for its speed. From the very start, Kirk keeps the tempo driving with his nifty work on the hi-hat.

Things start to slow down with the title track, a cool blues including another sneaky key change. Riley’s simple but sublime melodic improvisation floats over a steady groove. His sound on the saxophone may sound dated but fits the ensemble mood perfectly with its rich and seductive tone. Danish listeners will be familiar with his work alongside bassist Lennart Ginman and the New Jungle Orchestra.

In addition to Riley, Jan Harbeck, a longstanding friend to Kirk, also features. Again, he channels that old soul sound but with strikingly viscous phrasing. The penultimate tune, named Blues Arabesque, can only be described as a worthy tribute to Ellington’s Caravan.

Kirk’s simple writing style is a delight to hear and is never too far from the sounds of Duke Ellington and Count Basie. The melodies are charming and easily singable whilst the tempos are largely bright.

With the aid of an impressive band, Kirk has produced something inspiring in Going Up. Here’s hoping they deliver more exciting music as a unit in the future. As the liner notes rightly state: “Snorre has chosen his path with music that will not and must not die.”

Bruce Lindsay - 25 March 2019
Boston-based arranger, conductor and composer Ayn Inserto established her Jazz Orchestra in 2001. The group released its first album in 2006 (Clairvoyance) and its second, Muse, in 2009. Down...