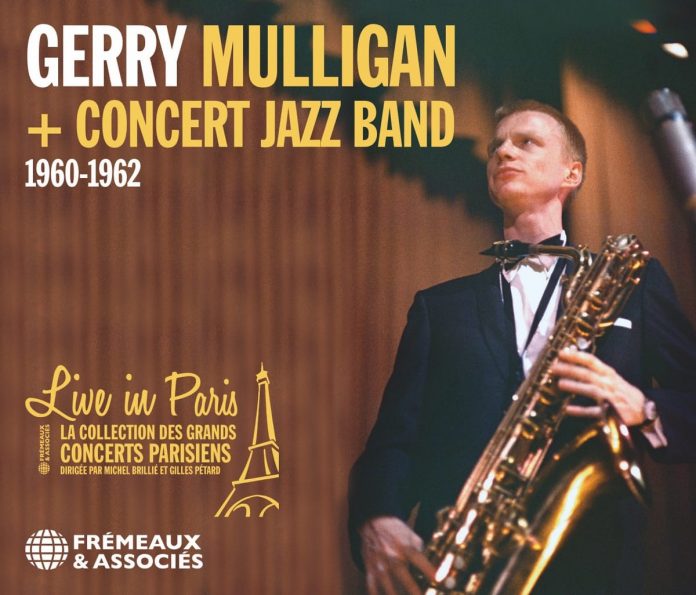 The subtle blending of ensemble lines evident in Gerry Mulligan’s writing for the Miles Davis nonet and his own tentette was reflected in the CJB charts provided by his team of writers – Bob Brookmeyer, Al Cohn, Bill Holman and Johnny Mandel. Although rarely an active contributor to the project he was very much a supervisor, saying at the time: “My stamp is on the band.” The 13-piece, with its unique saxophone section of clarinet, alto, tenor and baritone, was light on its feet and able to sustain much of the delicate interplay that had been such a feature of his smaller groups.

The band performed at 6 pm and midnight at the Paris Olympia Theatre in November 1960. Gambit Records 69249 has already released the entire second concert together with the 1962 quartet titles heard here on CD3. On this reissue Frémeaux includes this material and CD1 opens with four titles from the earlier performance which have not been released before.

Utter Chaos briefly introduces the band. It is reminiscent of Benny Goodman’s A Smo-o-oth One and had been Gerry’s theme song since 1952. You Took Advantage Of Me has a typically swaggering statement from Brookmeyer, who wrote the arrangement. The leader and Gene Quill stretch out inventively on Eighteen Carrots For Rabbit which Gerry had written for Johnny Hodges. Mulligan’s idiosyncratic keyboard work is heard on Darn That Dream. What it lacks in technique is compensated by an abundance of ideas – the very definition of arranger’s piano. The coda comes from Gerry’s 1950 chart for Miles Davis. Johnny Mandel adapted the cute Black Nightgown and the moody Barbara’s Theme from his I Want To Live film score. Don Ferrara in a cup-mute is particularly impressive on the latter.

Gerry was always a consummate ballad player and Body And Soul is a particularly good example of his artistry. Zoot Sims makes a few guest appearances and Apple Core finds him in rare form. As always he is the epitome of swing and his stop-time blowing over brass punctuations is a highlight here. On the penultimate chorus he leads the sax section, creating a sound like the Four Brothers. Conte Candoli doesn’t get too much solo space but he has three fine choruses on Holman’s rousing I’m Gonna Go Fishin’. Another who didn’t really get enough to play was the unique Willie Dennis, who has a richly satisfying outing on Broadway.

The quartet titles feature the great Gus Johnson. Bill Crow told me that as Mel Lewis and Dave Bailey were unavailable he had recommended Johnson, who was working as a bank guard at the time. Staples from the repertoire are performed together with Subterranean Blues, whose provenance is unusual. It is based on Gerry’s Things Are Looking Down solo from the September 1959 Subterraneans album which he repeated two months later on For Bessie with Ben Webster.

Michael Tucker - 20 May 2021
While well known for the distilled lyricism of his work, Fresu has never been a musician to do things by half. One thinks of the series of albums he...