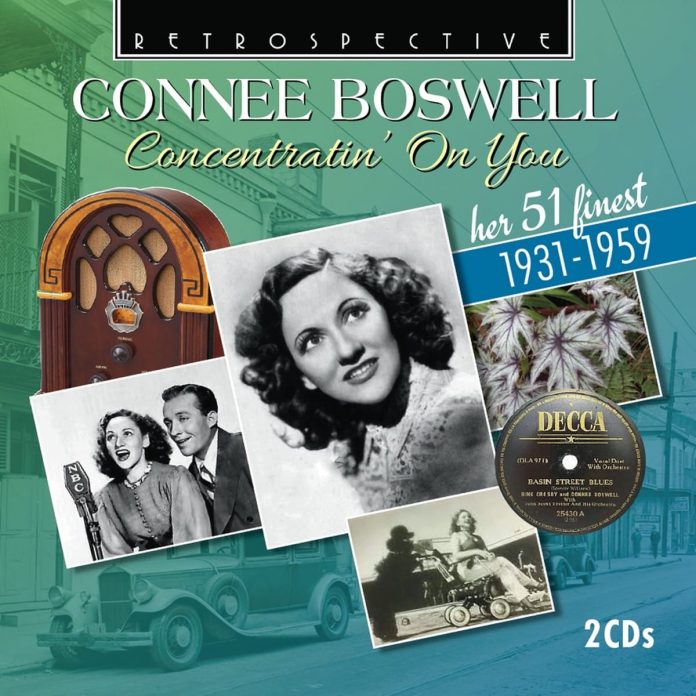 It’s probably true to say that the fans who bought these 78s as they were released and made Connee Boswell a best-selling recording artist are tripping the light fantastic in the big Make-Believe Ballroom in the sky under the watchful eye of Martin Beck.

Connee was the middle one of the three Boswell Sisters – Martha, Connee, Helvetia (Vet) – who are credited with introducing the “jazz” element into popular singing and were the template for later groups such as The Andrews Sisters. All three were accomplished musicians and, having grown up in New Orleans, were exposed to jazz from its earliest days. By 1936 all three had married and the act disbanded leaving Connee – who had often made solo records whilst part of the group – to pursue a solo career which lasted until the late 50s.

In this double CD it’s possible to note Connee’s adaptation to working solo. On If I Give My Heart To You, for example, she contrives to sound remarkably like Kay Starr and on the six selections from the two “Songbook” albums – Irving Berlin and Rodgers & Hart – with which she ended her career, her style is indistinguishable from that of other female singers of the day.

A bonus track features her very first disc, pre-electric, cut in 1925 in new Orleans with Martha on piano. Connee based I’m Gonna Cry (Crying Blues) on her then idol Mamie Smith, a radically different style from the one we associate with her.

She was celebrated for her duets with Bing Crosby, guesting on his radio show no less than 13 times; five of their duets are included here.

With the exception of one track recorded in London with Ambrose, one in Holland with Theo Uden Masden’s Ramblers and the aforementioned I’m Gonna Cry, all the selections were recorded either in New York or Los Angeles and I was pleased to find Frank Loesser’s Sand In My Shoes – which she performed in the film Kiss The Boys Goodbye – present and correct on CD1. Thanks are due to Retrospective for yet another wallow in yesterday.

Discography
CD1: Concentratin’ On You; Time On My Hands; Washboard Blues; Hummin’ To Myself; Me Minus You; It’s The Talk Of The Town; The Carioca; All I Do Is Dream Of You; Lost In A Fog; In The Middle Of A Kiss; I’ll Never Say Never Again Again; I Can’t Give You Anything But Love; On The Beach At Bali-Bali; That Old Feeling; Bob White; Basin Street Blues; Martha (Ah! So Pure); You Forgot To Remember; Home On The Range; I Hadn’t Anyone Til You; Gypsy Love Song; I Let A Song Go Out Of My Heart; Deep In A Dream; An Apple For The Teacher; Sunrise Serenade. (77.38)
CD2: Between 18th and 19th On Chestnut Street; On The Isle Of May; Dinah; Yes, Indeed; Smoke Gets In Your Eyes; Amapola; Sand In My Shoes; Look For The Silver Lining; Stormy Weather; One Dozen Roses; Let It Snow, Let It Snow, let It snow; Ol’ Buttermilk Sky; My Little Nest Of Heavenly Blue; That’s A Plenty; If I Give My Heart To You; When My Sugar Walks Down The Street; Say It Isn’t So; When The Saints Go Marching In; Make Love To Me (Tin Roof Blues); Blue Skies; Always; Cheek To Cheek; My Funny Valentine; I Could Write A Book; Where Or When; bonus track: I’m Gonna Cry (77.38)
Boswell (v) with various accompaniments. 1931-1959.
Retrospective RTS 4384

John White - 25 August 2021
This CD contains two of Powell’s Verve albums produced by Norman Granz - Jazz Giant and Bud Powell Piano - both of which are among his best early recordings,...