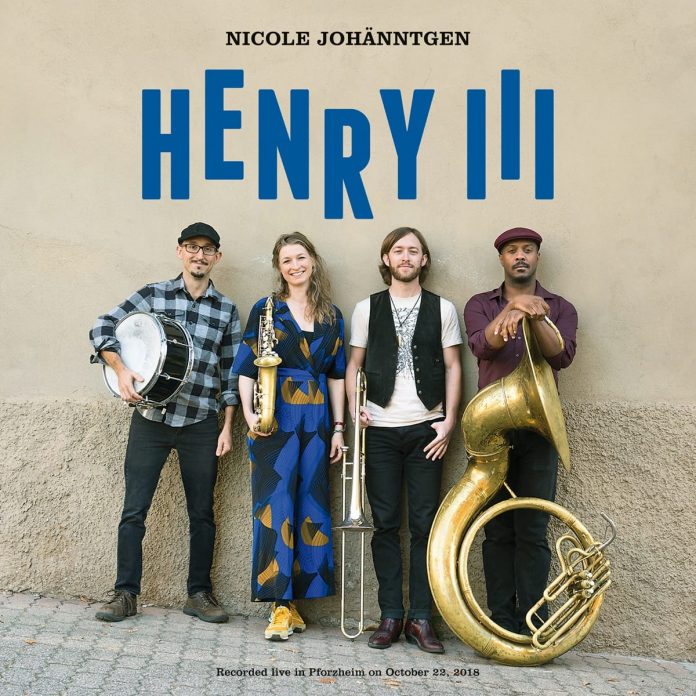 Inspired to pick up a saxophone as a youngster by the lively funk of Candy Dulfer, the Swiss Johänntgen has long developed into a wide-ranging improviser and composer. Her projects have ranged from solo and duo recitals to work with the all-female ensemble Sisters of Jazz and her Nicole Jo quartet recently celebrated 20 years in the business. In the last few years the New Orleans-fed Henry project has been especially close to her heart.

This, the third Henry album, is a live affair. Written and produced by Johänntgen and recorded with great sound in front of an appreciative audience at the Domicile Jazzclub in Pforzheim, Germany, it builds on the diverse strengths of the two previous Henry releases.

As one might expect, Henry III is in good part a get-down gumbo funkster of an album. Sample the opening, medium-bounce cooker that is Life, with its call-and response interplay summoning some of Johänntgen’s strongest playing over irresistible grooves from Glenn’s excellent sousaphone figures and Thibodeaux’s drums. But the finger-clicking, riff-rich fun of tracks like this and Discoland, or the punchy, lightly but firmly pumped Biological and Zydeco – relish Thibodeaux’s terrific solo on the last– is balanced by some pleasingly mellow and reflective pieces.

Hear Too Loose, where Ramm’s trombone shines, Sweet And Honest and Dig Deep. The last two showcase all these musicians’ ability to testify strongly at a restrained tempo, with Dig Deep featuring both potently measured instrumental work and some effective (uncredited) vocalising.

A lively and lovely album of exceptionally attuned group dynamics and considerable rhythmic verve closes with a typical mix of urgent, funky fun – Fahrtwind, where Thibodeaux is again strong – and the brief and tender ballad that is Guetnachtlied, led chiefly by Ramm and Glenn.

Steve Voce - 10 March 2019
Sarah made her first recording when she joined Billy Eckstine’s band in September 1944. It was of Tadd Dameron’s chart of "I’ll Wait and Pray" for the obscure De...

Benoît Delbecq: The Weight Of Light