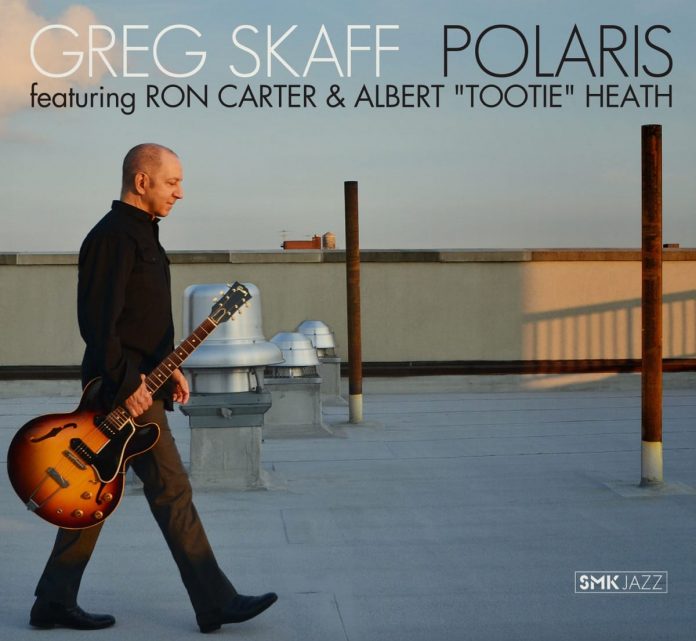 The obvious unique selling point of this album by guitarist Greg Skaff is the participation of two genuine legends of jazz. It’s probably a given that most people reading this review will have heard of Ron Carter, if only by dint of his membership of Miles Davis’s second great quintet (1964-1968). Drummer Albert “Tootie” Heath began his recording career playing on two of John Coltrane’s early albums, Coltrane (Prestige, 1957) and Lush Life (Prestige, 1961).

Skaff started his professional career in the early 1980s playing with saxophonist Stanley Turrentine for five years. Since then, he’s played with a varied cohort of musicians including Bobby Watson, Freddie Hubbard, David “Fathead” Newman, Gloria Lynne and Victor Lewis.

For the past 35-odd years Skaff has played in multiple outfits, including his own organ trio, but this is the first occasion on which he has recorded with a keyboard-less trio. The date also, significantly, reunites its two guest artists since their first recorded gig together nearly six decades ago, when they provided the rhythm section to pianist Bobby Timmons’ live album In Person (Riverside, 1961).

The album is populated by standards such as Old Devil Moon and Angelica and originals like Skaff’s paean to Carter, the boppy Mr R.C. and the elegant title track. Carter contributes some tunes too, including the bluesy Carminando and two versions of the lyrical ballad Little Waltz.

Skaff plays his mid-toned guitar with a classic, fluid feel similar to that heard on the trio outfits led by Kenny Burrell on, say, A Night At The Vanguard (Argo, 1959). One point to note is that Carter and Heath, both in their 80s, still execute their respective roles with aplomb and finesse.

Roger Farbey - 04 December 2020
To say that this archival set is greater than the sum of its parts is not entirely accurate but this release certainly offers more than the four tracks presented...