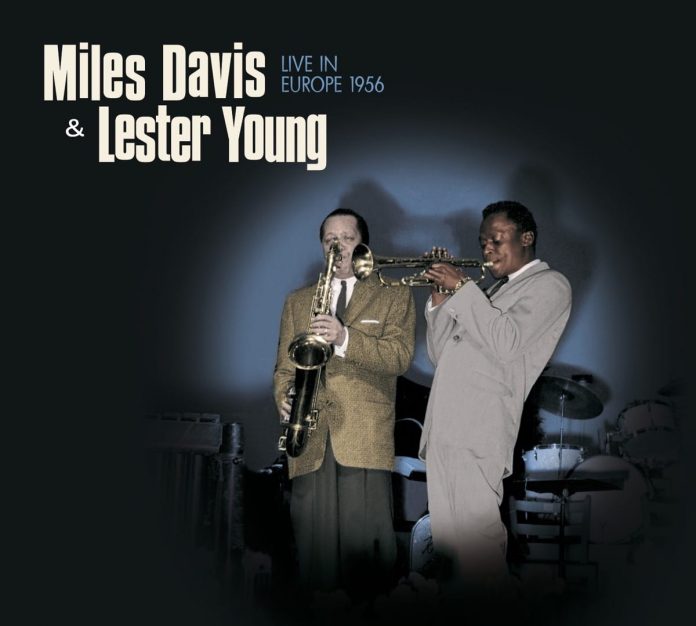 Some, if not all, of these performances have been issued on several labels over the years, usually in decidedly lo fi. The provenances of the first 11 tracks are concerts given in Germany, France and Switzerland – (and later in Holland, Belgium and Denmark, Sweden and Italy by a group calling itself “The Birdland All Stars”). They included Lester Young, Miles Davis and the MJQ, supplemented on these selections by European musicians René Urtreger, Pierre Michelot and Christian Garos.

The pairing of Pres and Miles must have seemed like a marriage arranged in heaven. Unfortunately it was not a happy – or long lasting – union. Despite strong rhythmic support (and vocal encouragement) from Urtreger, Michelot and Garros, Lester sounds tired and vapid, barely managing to swing. His best efforts are (appropriately) on Lester Leaps In (with the support of the Kurt Edelhagen’s Big Band), and Indiana, with the Urtreger Trio.

The “bonus” tracks, recorded in passable sound at the 1955 Newport Jazz Festival, and introduced by Duke Ellington, have Miles in the company of his peers, Zoot Sims, Gerry Mulligan, Thelonious Monk, Percy Heath and Connie Kay. Hackensack has Miles delivering a long and thoughtful solo, with Monk’s unique “comping”, and Zoot, as always, totally relaxed and striking sparks with Mulligan, before Monk’s own bright choruses.

The outstanding performance is ’Round Midnight, with Miles on muted trumpet. He reportedly said that after his solo “Everybody went crazy. I got a long standing ovation. All the musicians were treating me like I was a god and all for a solo I had had trouble learning. It was something else. Everybody was looking at me, offering me record deals.” Mulligan is heard to good effect kicking off Now’s The Time, followed by a high-pitched Miles and a softly swinging and inventive Zoot. Monk joins the proceedings with an already recognisable “sound” – soon to become his musical trademark.

Altogether, a somewhat mixed bag, with an audibly failing Pres, and the honours easily going to Miles et al at Newport.

Peter Gamble - 05 June 2019
For interested parties, Carroll M. DeCamp (to give him his full name) was an Indianapolis pianist, composer and arranger who spent many decades in the music business, including 10...