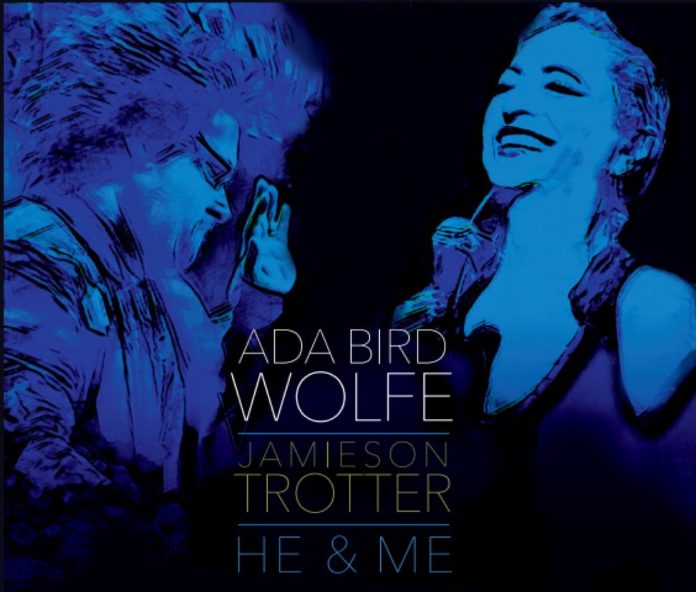 After studying music as a child and developing as a multi-instrumentalist (piano, guitar, cello, saxophone, flute), Ada Bird Wolfe first chose to work outside music. However, following time spent as a journalist, she came back to music and in recent years has worked in clubs in Los Angeles. There, she takes both the more orthodox approach to nightclub singing and also performs themed shows that she creates out of the work of jazz artists including John Coltrane, Charles Mingus, Miles Davis and Thelonious Monk.

Pianist Jamieson Trotter has worked extensively in Los Angeles, playing in clubs, working in films and on television, and he has also worked as composer with Sergio Mendes.

Here, on what is Wolfe’s second album (following 2018’s Birdie), singer and pianist team up to present an intriguing selection of songs mostly from sources similar to those in the singer’s shows. These range through Wayne Shorter’s ESP, Dizzy Gillespie’s Night In Tunisia, Thelonious Monk’s Straight No Chaser, and Miles Davis and Bill Evans’ Blue In Green and All Blues.

They also incorporate traditional blues with Lovie Austin’s Any Woman’s Blues, classic popular song, Johnny Burke and Jimmy Van Heusen’s But Beautiful, latterday pop with John Lennon and Paul McCartney’s Blackbird, as well as three of their own originals: Sweet Nardis, Too Much Stuff and Done With That.

Wolfe’s approach to her interpretations is distinctive, no-frills, always intense. Her contralto sound can be rich, although at times, and always where appropriate to the lyrical content of a song, she adopts an almost conversational air. Trotter is a powerful presence, his interplay with and backing of the singer is exceptional and together they clearly demonstrate that their collaboration is a meeting of like minds. Featuring contemporary jazz singing that is always accessible, this album should have broad appeal.

Discography
Mind To Mind (ESP); Night In Tunisia; Sweet Nardis; You’re Everything; Logo EU; Too Much Stuff; Any Woman’s Blues; Blue In Green/All Blues; Blackbird; But Beautiful; Get It Straight (Straight No Chaser); Done With That (50.41)
Wolfe (v); Trotter (p). Los Angeles, 2020.
adabirdwolfe.com