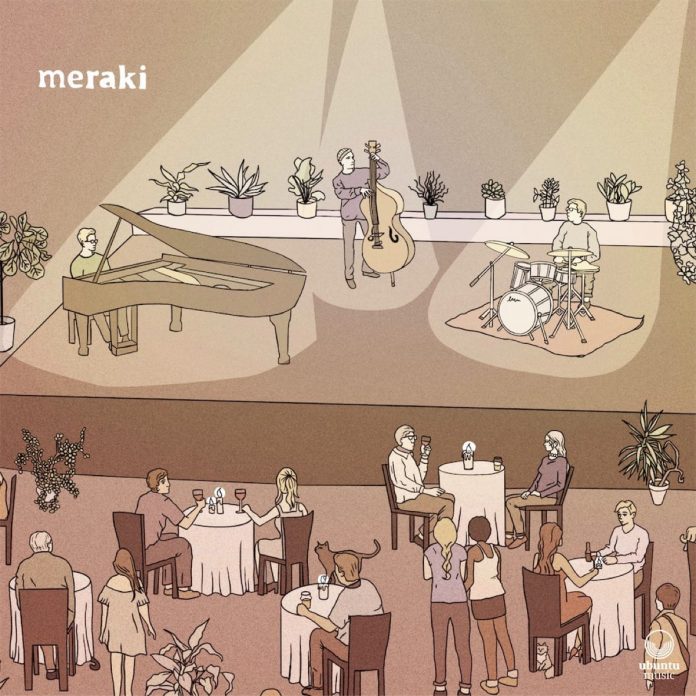 Meraki are an alluring trio formed by Yorkshire-born pianist Jacky Naylor featuring the talents of double bassist Nick Jurd (formerly of the Soweto Kinch band) and (former BBC Scotland Young Jazz Musician of the Year) drummer Jonathan Silk. Naylor studied with John Taylor at a conservatoire in Birmingham, landed a lesson with Maria Schneider after winning a big band composition prize and was later awarded multiple stars from major jazz mags reviewing his 2016 suite Rough Boundaries. He also received the converted Dankworth prize for composition for the piece, Bilbao, taken from that same suite.

Lottery Arts-funded, Meraki’s self-titled debut was recorded at Peter Gabriel’s renowned Real World studios last year. Drawn into the disc’s retro, cartoony cover we see the band portrayed on a sofa beside framed images of what looks like Miles Davis and John Coltrane. But the music itself points more to that of European trios, pianists such as Kit Downes (who describes Naylor as “creative, both as a composer and player”) and Gwilym Simcock and, when the music trips over into more abstract territory, groups like Phronesis or E.S.T.

9 Lives opens with some delicately planted chords on piano and Naylor dancing around a minor key Latin riff and a low-hung line from Jurd. With an intensity building from the drums, and in particular Silk’s trashy cymbal work, it’s a joy to hear Naylor later toying with simple swing motifs, and also how he abruptly flips into harsh, knottier figures while retaining strong flow. 43 is at once a distinctly funkier affair. Between a clicky samba groove and some improvised bursts around the set, Silk plays upfront through this tune too, largely in unison with the piano. Judd’s lines are also pronounced and powerful, his solo in particular bold with a buzz style and tone that evokes that of a young Eddie Gomez with Bill Evans.

Breaking up a mostly upbeat set are a pair of minute-long piano interludes. The first, awash with dark cymbal rolls, ushers in Two Sides Of The Same Coin, a highlight here and spotlight for Silk, whose soft, scratchy brush work flutters from under a warm  bass and piano refrain into some equally sensitive swing and samba patterns with sticks. There is a similarly samba-esque groove running through Sherpa too which has some of the album’s strongest improv moments, especially between Naylor and Silk whose rapid ride patterns, crisp rolls and inspired fours throw strong ideas to Naylor’s tight, rhythmic phrasing.

The track Dr Jekyll And Mr Hyde – typically split between delicate and driving, feint and frantic and undercooked and overblown – is followed by Interlude 3, broad with buttery bass, soft brushes and keys. It’s another minute of pure ambience that beautifully establishes the remainder of the record. Over what appears to be rattling sea pods or a collection of slowly spun shells, In A Sailing Boat floats around a subtle bossa and acts as a springboard for all to slowly stretch out. This is followed by Simple Things, a lush track split between swing and the subdued, encompassing more unexpected twists, turns and rich rhythmic ideas.

Les Baxter And His Orchestra: Ritual Of The Savage (Le Sacre Du Sauvage)

Michael Tucker - 09 June 2021
Music, Boethius reminds us in his sixth-century De Institutione Musica, can serve both to ennoble and to degrade. One wonders what the eminent philosopher might have made of both...