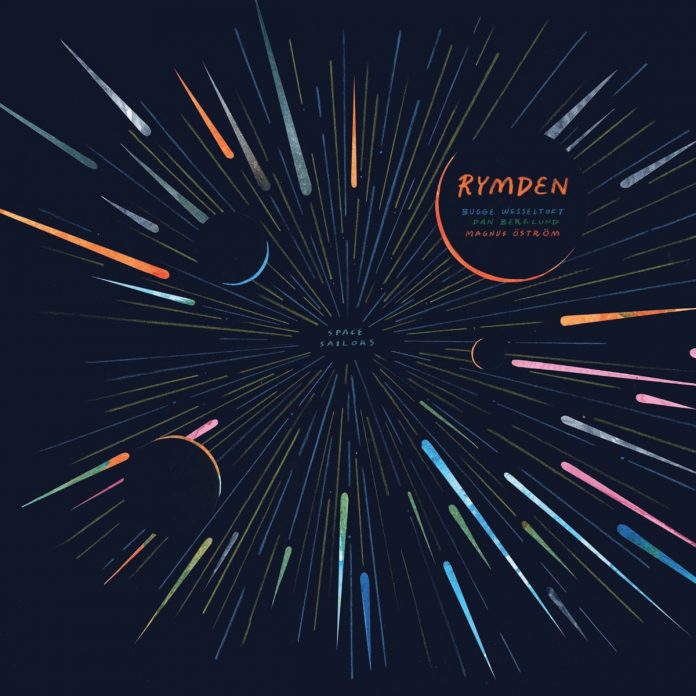 I had the pleasure of seeing Rymden perform several times in 2018-19. At that stage their debut album Reflections And Odysseys had been recorded, and it was clear that they were already diving deeper into the worlds of analogue electronics and psychedelia. Jazzland’s release notes for this sequel speak of a fusion of 60s esoterica and raw punk energy, and while comparisons to DC hardcore legends Fugazi are perhaps a little fanciful, listeners will certainly detect a harder edge. It’s a more eclectic palette, and one which is often redolent of Berglund’s other group, Tonbruket.

It opens in grand style with Hugo Drax where we’re treated to an earthy riff worthy of Sabbath or Zeppelin. A spacey middle section circles Hawkwind, but its abrupt jump-cut ending is pure post-punk DIY. The Space Sailor rides a heavy Krautrock beat before the pulse mutates into something altogether more elastic, and Wesseltoft’s Rhodes generates a kaleidoscope of textures and colours.

Berglund’s Söndan is the first ballad of the set, his knotty low-end chords creating a dark undertow that stands in stark juxtaposition to Wesseltoft’s lyrical piano flight. Released as a single in June, Terminal One is the album’s biggest ear-worm. It floats on a cunning post-E.S.T. groove, its delicious chord sequence and intricate unisons steeped in the blues.

Berglund’s keening arco sets up the moody Pilgrimstad, and whether named after the small Swedish province or its micro-brewery, it leads nicely into the two-part opus Arriving At Ramajay. The classicism of Part I basks in a lustrous light, while Part II goes below the surface to find a menacing underbelly. The slightly too epic post-prog fanfare is a little problematic, but other than the garish synth-led climax to Free As A Bird it was the only moment which sat uncomfortably with me. Full decorum is restored with the elegiac My Life In A Mirror, the closest we get to a classic Scandi-ballad, while the zero-gravity Söndan Outro offers the perfect docking port as the trio’s warp-speed journey winds to a close.

A well-paced and nicely varied collection of songs, Space Sailors feels like a quantum advance on its impressive predecessor.

Matthew Wright - 01 March 2020
Although still relatively young, pianist George Cooper is well known as a session musician and has worked with a variety of performers. It’s also well known that his interests...