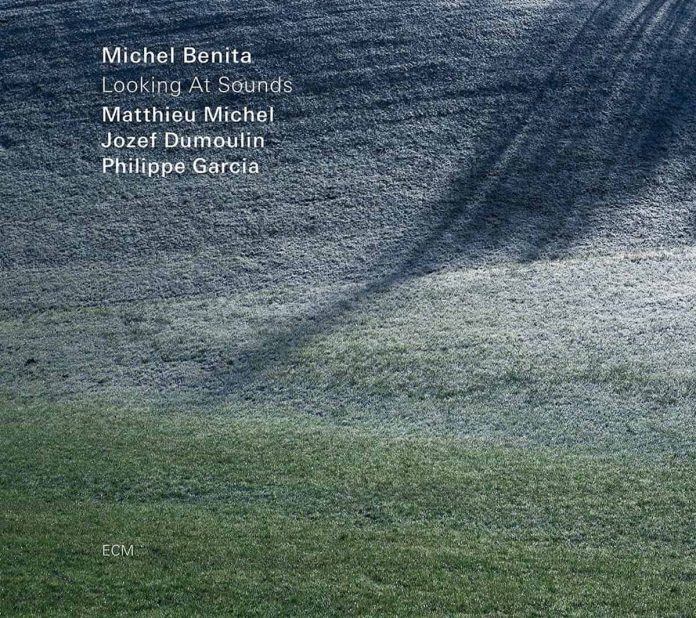 Born in Algeria in 1954, Benita moved to Paris in 1961. For some considerable time now he has been a leading figure on the French and international scene, with an increasingly global approach. Many will have enjoyed his bass playing, as imaginative as it is supportive, on ACT albums like guitarist Nguyen Le’s 2008 Dream Flight with Peter Erskine (d) and accordionist Vincent Peirani’s Thrill Box from 2013 with Michael Wollny (p, elp), Michel Portal (bcl, bandoneon) and Emile Parisien (ss).

Produced by Steve Lake, Looking At Sounds extends Benita’s relation with ECM, which includes work with Andy Sheppard (Trio Libero, Surrounded By Sea, Romaria) as well as his own River Silver of 2016. This was Benita’s debut as leader on the label with his Ethics quintet featuring, a.o., Eivind Aarset (elg) and Mieko Miyazaki (koto). Both are absent here but the Swiss Mathieu Michel (flh) and the French Philippe Garcia (d, elecs) are retained, joined by the Belgian Jozef Dumoulin (elp, elecs).

Michel’s flugelhorn plays a key role within the shape-shifting group interaction, his broad sound warm and intimate, his lines as thoughtfully cast and poetically resonant (Berceuse/Gwell Talenn) as they can be assertive dynamically and rhythmically (Sounds, Diva, Islander). Apart from Kristen Nogues’s Berceuse and Carlos Jobim’s Inutil Paisagem the bulk of the compositions are by Benita, with Jule Styne’s concluding Never Never Land given a resonant solo bass pizzicato reading.

Three pieces feature an engaging, diversely kicked ostinato pulse: the title track, Diva and Islander. For all such rhythmic momentum, a quality of dream-like rubato reverie predominates, with judicious touches of electronically processed colour and sound wash underpinning the overall mood: hear Looking At Sounds and the group improvisation that is Cloud To Cloud. A strong and lovely album, which on each listen reveals more and more of its subtly voiced depths.

Michael Tucker - 15 May 2019
This is the second excellent album of contemporary Serbian jazz I've had the pleasure of reviewing recently – the other being the duo V release by Uros Spasojevic (elb)...

Jazz Journal - 28 May 2021
On Tuesday there were more string players on stage than in a Palm Court Orchestra - not a horn player in sight. On paper this looked like one of...