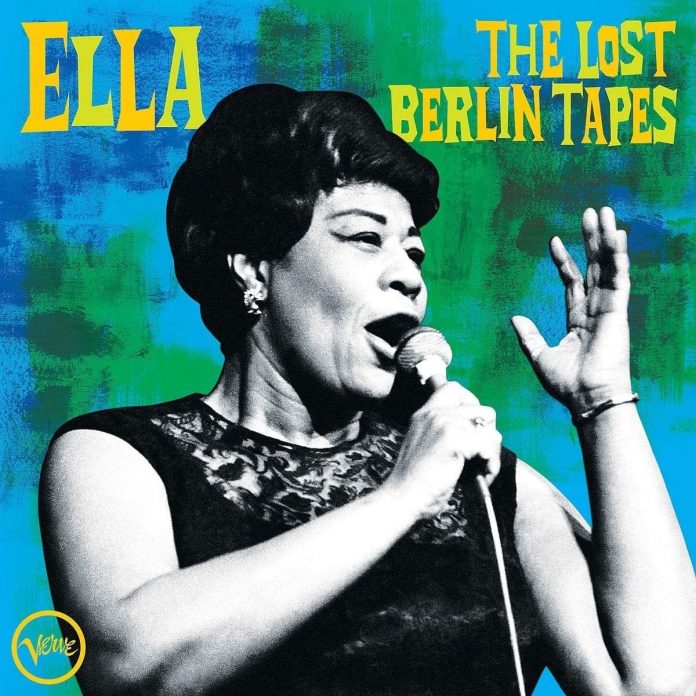 A wave of lost material has rolled in recently, seemingly out of nowhere. Some of it is of limited value, some medium value; some issues offer a few valuable additions to the music. This one comes into the last category. It’s from the private collection of Ella’s manager, Norman Granz and from a second Berlin concert two years after her Grammy-winning release Mack The Knife: Ella In Berlin. Granz may have planned it for future release but either forgot it or wanted it for his private collection.

There must have been something in the air in Berlin in 1962, because Ella did it again with this previously unissued set. She is on top form once more in front of a large, enthusiastic audience backed by her regular trio of the time: Paul Smith, piano, Wilfred Middlebrooks, bass and Stan Levey on drums. Where in 1960 she forgot the words to Mack The Knife, this time she knows them but forgets the name of the city she is playing in. The audience laugh at the confession, but they would have forgiven her anything short of refusing to sing.

Ella had it all – perfect pitch, the ability to improvise and scat on just about any lyric and a natural, easy swing. On Cheek To Cheek she bounces in, bright and blue, supported by Smith’s piano before the rhythm section tighten their grip and join in. My Kind Of Boy suits her style admirably and is followed by a straight but highly effective Cry Me A River. No soft, seductive reading for this lady – it is her own interpretation and a million miles removed from the famous Julie London version.

Following that she Won’t Dance and then requires Someone To Watch over her. Jersey Bounce is another swinger all the way and there is a slow, reflective reading of Angel Eyes to follow. Clap Hands, Here Comes Charlie might seem an unusual choice, but she makes a straightahead jazz performance from unlikely material and Stan Levey gets a good workout at the drums. LP2 ends with Taking A Chance On Love and C’est Magnifique, followed by uproarious applause and stomping.

The second LP gives us a bluesy Good Morning Heartache and Hallelujah I Love Him So. She takes two stabs at this one, singing it straight for three minutes and then launching into a further three where she improvises effectively on the melody and scats through the rest at a galloping tempo. Summertime is given a smooth ballad treatment. Mr. Paganini is another uptempo romp and then it’s Mack The Knife with lyrics intact. No slouch at performing a down home, slow blues, she ends the recital with five and a half minutes of a sublime Wee Baby Blues.

It is the sort of vocal jazz concert you would love to have heard live, if, like me, you were not there on the day. Just listen to that audience roaring at the end. Good, clear professional stereo sound on top-quality vinyl adds icing to the cake.

Roger Farbey - 16 March 2021
The four-to-the-floor Double Shocking Busy opens this intriguing set with unfettered gusto and in so doing succinctly lays out this quartet’s hard-rocking manifesto. But there are plenty of nuanced...