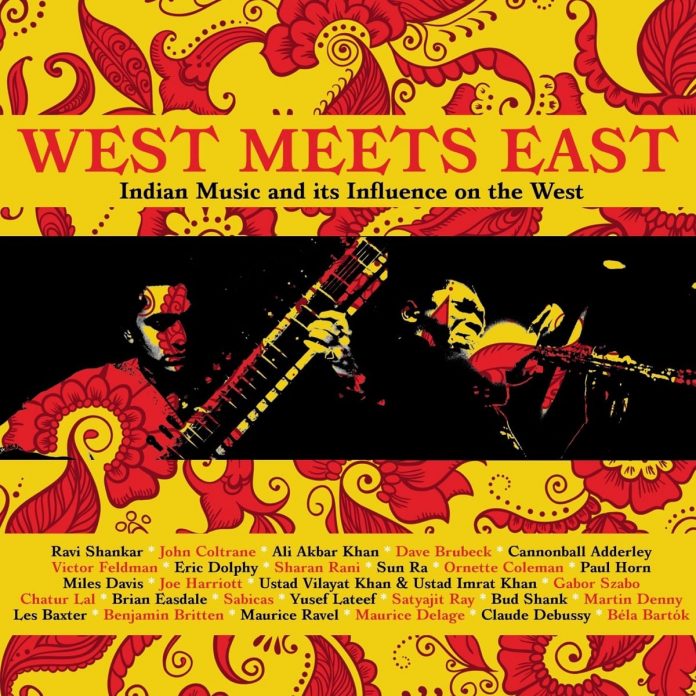 The number of rock musicians influenced by Indian music is legion. Obviously, The Beatles were prime examples of this. Others in the popular music sphere included the likes of The Rolling Stones, The Byrds, Jeff Beck, The Kinks, The Doors, Donovan and Traffic. The list goes on, almost ad nauseum. The Small Faces’ Steve Marriott was quoted in a 1966 edition of Melody Maker saying “We’ll be able to get plastic sitars in our cornflakes soon.” Sadly, there are no examples of Indian-influenced pop or rock music represented in this three-CD collection. This is a shame since there are surely myriad examples from which to choose.

Arguably, the most directly Indian-influenced artist in jazz is (Mahavishnu) John McLaughlin, whose My Goal’s Beyond (Douglas, 1971) was the first in a long line of the genre-influenced recordings which included his notable Shakti ventures. But McLaughlin is absent here too. Some of the most important players in jazz had been in thrall to the music of the sub-continent. Coltrane, Miles Davis and Ornette Coleman all fell under this magical Eastern spell and happily these are all represented here.

But these Indian influences are not limited to rock and jazz. A famous team-up in classical music featured virtuoso sitar player Ravi Shankar and the equally virtuosic violinist Yehudi Menuhin. This association gave rise to the highly successful album West Meets East (HMV, 1967) and two follow-up records. So it’s somewhat disappointing that a track from any of those recordings isn’t included in this eclectic compilation. However, classical composers Béla Bartók, Benjamin Britten, Maurice Ravel and Claude Debussy are all given space on CD3, which hosts a massive 25 tracks, the preceding two CDs containing a more modest seven and eight tracks respectively. Interestingly, all three CDs squeeze out around 80 minutes each so there’s certainly no stinting on the music.

Of all the Indian musicians of the 20th century, Ravi Shankar is surely the most renowned and revered. He indisputably had an effect on Britten, Menhuin and, famously, on George Harrison. But Coltrane too was impressed when he said of him “I like Ravi Shankar very much. When I hear his music, I want to copy it … What brings me closer to Ravi is the modal aspect of his art.” Of course modal jazz and Indian music share similarities, not least in their penchant for extemporisation over long periods and over few chord changes or none. Shankar is afforded two tracks, one solo but one, intriguingly with flautist Bud Shank, which works superbly.

One curious omission is the lack of any Indo-Jazz Fusions tracks. Rather instead is the Joe Harriott track Modal from the album Abstract (EMI Columbia, 1963). Harriott and violinist John Mayer shook the jazz world with their various fusion recordings, which were brilliant early examples of this crossover music. The Indo-Jazz Fusions Double Quintet album (EMI Columbia, 1967) contained one track, Acka Raga, that in its instant commerciality could have been the theme tune for this whole genre. It actually was the theme tune for the BBC quiz show Ask The Family.

There’s also a sidebar included in this set dealing with the exotica genre, again spawned by these Eastern influences. The progenitor of this specialist area was Martin Denny and Moonlight On The Ganges from his seminal album Exotic Percussion – The Exotic Sounds Of Martin Denny (London, 1961) makes for fascinating albeit perhaps ambivalent listening being neither one thing or the other, but that is the point surely? Another major player in exotica was Les Baxter whose Harem Silks From Bombay and The Left Arm Of Buddha included on the compilation album The Exotic Moods Of Les Baxter (Capitol, 1996) are given an airing here.

Ultimately, whilst there are some shortcomings to this package, it would be a pretty tall order to create a “perfect” collection in this vein. The pluses easily outweigh the minuses and even for a listener steeped in jazz there’s much to be learned from this assemblage. For example, who knew that that Dave Brubeck was such a fan of Indian music? Check out his fabulous Calcutta Blues from Jazz Impressions Of Eurasia (Columbia, 1961) inspired by his world tour of that year. Equally terrific is Gabor Szabo’s trademark sitar/drone-sounding guitar on Chico Hamilton’s El Toro from Passin’ Thru (Impulse!, 1963). Another example is Mirage For Miles by the lesser vaunted but no less interesting Paul Horn Quintet from The Sound Of Paul Horn (Columbia, 1961). So there’s a lot of value to be found within this three-CD compilation. Crucially, the set succeeds in making a strong case for the significance of Indian music in influencing a whole swathe of Western music, plastic sitar notwithstanding.