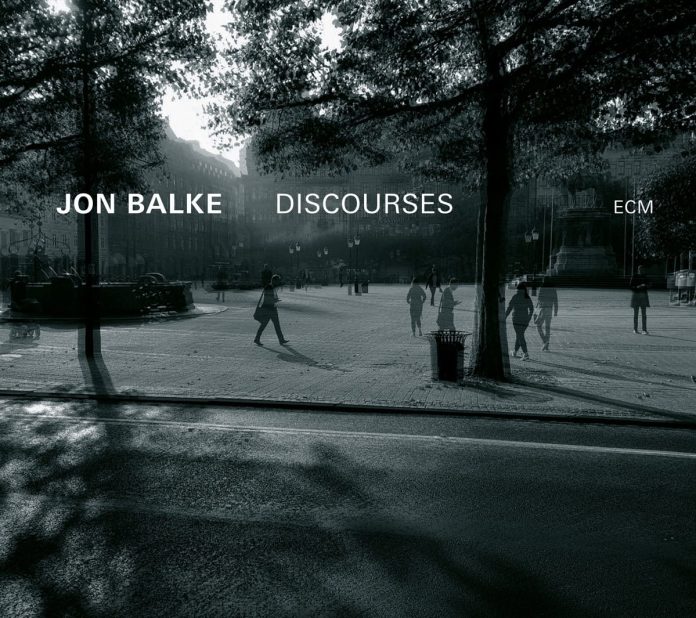 Norwegian pianist Jon Balke has hit on a novel way of accommodating annoyance and criticism: he creates his own. He uses sonic interventions to embody the corruption of temperate debate in politics and in public. Here he is, head down, getting on with the business of temperate music-making, when out of the ether all manner of ‘”processed” noise skies towards him. Discourses is thus a concept album; if it weren’t one would have to consider these solos and their dissonant interruptions as being of a piece and unrelated to his concerns about the way we engage with each other.

Having been assaulted by unreason, he now has to face from a reviewer a further layer of censure. I’m sympathetic but will assess the music as music, not as commentary on something beyond it. In this case, sympathy comes with a smile, because the extraneous noises meant to stand for obstacles to civilised parleying are Balke’s own, put together from software and recordings of sounds from elsewhere, including from his own cello.

The noise is timid and in some cases absent altogether. On The Assumption the piano is determined to hold its own; The Container carries on against what sounds like nothing more worrisome than dull noise from an adjoining room. Only The Facilitator, after a pacific start, finally gives in to irritation, as does The First Argument. The Suspension and some others have no competition at all. The Polarisation sees him accommodating interference that nonetheless grows menacing.

ECM is often associated with the acoustic piano solo marathon. Beside that, Balke’s 43-minute stint is a mere 30k jog. Keith Jarrett’s Cologne concert had irritations centred on the comic self-indulgence of the pianist’s on-stage gyrations and orgasmic yelps. We get no vamping or ejaculations from Balke. Nor are these immaculately prepared and performed piano miniatures themselves anything other than diatonic, chromatic, non-jarring, and often lyrical when not febrile. All the noise comes unsolicited (sic) from yonder. This is Balke’s third ECM album employing the same hybrid methods on his own compositions.

Discourses could have been played without the overdubbing. Then there would have been no need to explain anything. With the noises but without an associated commentary, we could have been allowed to make our own connections, justified or not. All that said, the album has a lot of heart and immediacy, and is superbly recorded.