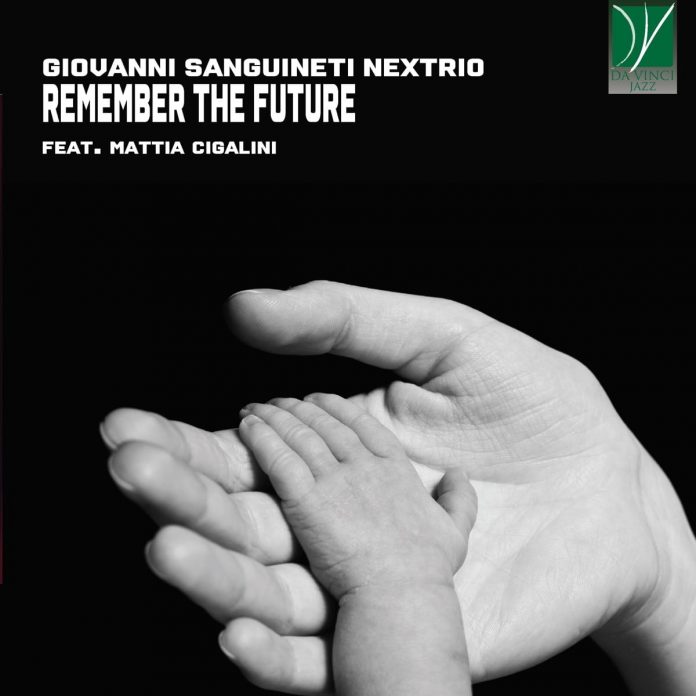 In this sixth outing from Italian double bassist Giovanni Sanguineti all eight numbers are self-penned originals. His trio, Nextrio, is joined on four of them by guest alto saxophonist Mattia Cigalini.

The title of Sanguineti’s last album, Gnothi Seauton (2016), comes from the Delphic maxim meaning “know yourself” and it is this philosophical approach to life which underpins much of Sanguineti’s current work.

Remember The Future combines modern mainstream with contemporary jazz. The first track, Once Upon A Tomorrow, with its melodious bass soloing has first thoughtful and then catchy piano from Mario Zara. Sanguineti says the song suggests hope for the future and whether this future will be better or worse isn’t really important – knowing there is a future is enough. Perhaps an apt consideration for these pandemic times.

The next track, Le Identità Di Un Giorno, translated as “the identities of a day” has alternating rhythms and introduces Cigalini on energetic sax. It’s followed by Old Time Remedies, a swing number with intense sax soloing and a snappy melody. Sanguieti says it refers to the good times such as the blues and the standards. Utopsia emanates from Dario Falconi’s book of the same name and concerns the need to revert to an ethical way of life by respecting oneself and others.

Le Torri Di Rodia refers to the sculptural towers in Watts, Los Angeles that took odd-job man Simon Rodia 33 years to build from scrap materials and industrial waste before he disappeared. The composition represents human perseverance and has ardent piano, resonant double bass and complex rhythmic drumming. It’s followed by Perseidi, a soulful ballad pertaining to the eponymous meteor shower and the ancient custom of entrusting our desires when making a wish upon observing it. Distopia is a modern swing number reflecting a future society that’s politically and socially disagreeable. The final track, When Air Becomes Breath, alternates between sax and piano soloing in order to suggest the mechanics of breathing. Sanguineti says it signals that the air around us is static and that it’s only through us that it becomes breath and subsequently life.

Even if you can’t always spot the contemplative meanings behind these compositions (I couldn’t) – no worries – the music is both thoughtful and swings by itself.

Barry Witherden - 15 May 2021
August 2020 saw the 100th anniversary of the birth of Charlie Parker. By then he had been dead for more than 65 years but he remains hugely influential, directly...