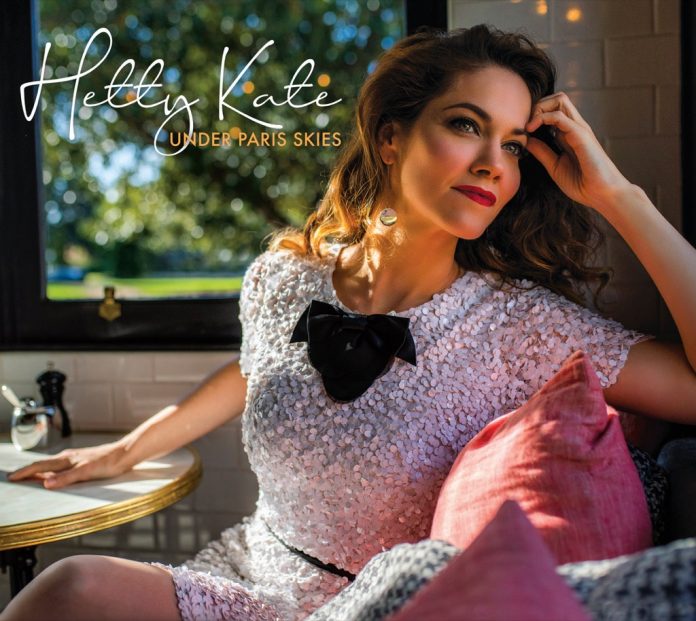 Although new to me, this pleasing young singer has been active for more than a decade, making her first album in 2009. Born in England, she moved to Australia before her teens and developed her career there where she is well known. Since 2017 she has been resident in France and this new release (her ninth album) draws upon her life in the City of Lights although it was recorded during an Australian tour.

As can be seen from a glance at the track listing, Kate’s chosen repertoire draws upon standards but her approach is refreshingly individual. Helping vary the familiar, the songs are presented in a pared-back manner as she is accompanied only by guitar and bass. Kate interprets lyrics with care and obvious affection and all three musicians swing lightly, their approach being both imaginative and engaging.

Not surprisingly, given the group’s format, there are several guitar solos by James Sherlock, all extremely well taken. On occasion, Sherlock overdubs, providing both lead and rhythm guitar. Mostly, bassist Ben Hanlon provides strong support but has a field day on After You’ve Gone where he, too, overdubs, plucking and bowing with flair. That old favourite of jazz musicians is taken at a more relaxed tempo than is usual and benefits greatly from this reflective performance.

Some of the lyrics are sung in English, some in French, some both, while Darling Je Vous Aime Beaucoup is, of course, an early example of Franglais. This is a very enjoyable album and really quite charming (and that’s a word I don’t think I’ve ever used before).

Discography
Azure-Te (Paris Skies); On The Street Where You Live; Once Upon A Summertime; Get Out Of Town; If You Could See Me Now: Darling Je Vous Aime Beaucoup; Under Paris Skies; La Belle Vie; After You’ve Gone; Tout Doucement; Down With Love; A Nightingale Sang In Berkeley Square (41.21)
Kate (v); James Sherlock (g, arr); Ben Hanlon (b, arr). Melbourne, Australia. 2017 & 2018.
Lisez l’Etiquette HKDDUPS19

Steve Voce - 05 November 2020
The sessions included here use four of the most distinguished jazz players who all play at their routine best – Monk, Trane, Hawk and Blakey (Monk had recently made...