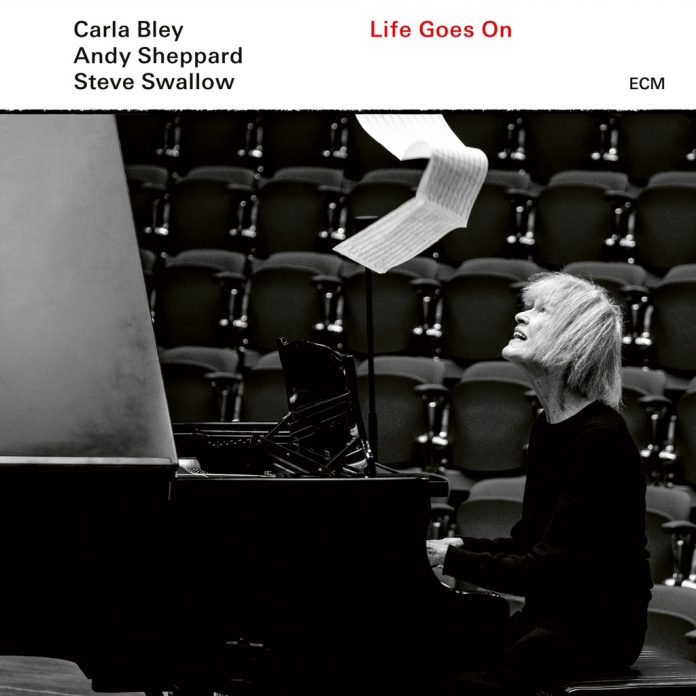 Carla Bley is 82 in May. She formed her drumless trio over 25 years ago with her bassist husband Steve Swallow and UK saxophonist Andy Sheppard. Life Goes On is their fourth album. The cover picture is from the same photo session used for the sleeves of Bley’s previous two recordings, Trios and Andando El Tiempo. In some respects this continuance echoes the essence of the current album as the music here was composed by Bley following recovery from an illness and so for her, life does indeed go on.

The album has three suites: Life Goes On, Beautiful Telephones and Copycat. They’re full of catchy tunes composed by Bley in her own inimitable way, recalling at times the wryness of Erik Satie.

The title suite begins with a tormentingly slow 12-bar blues followed by On with its Monk-style dissonance, then the whimsical And On and lastly the sanguine And Then One Day.

The second suite, Beautiful Telephones, refers to Donald Trump’s observation upon first entering the White House. Whilst the remark sounds typically doltish he meant no one would be able to listen in and record his conversations. Alternating frequently between excitement and impatience, nothing stays the same, for, as Bley says, with the attention span of DT they have to quickly change the music too. In similar vein the trio go on to weave sardonic excerpts from patriotic anthems such as Yankee Doodle Dandy and Star Spangled Banner until they bow out with ironic and diminishing strains of My Way.

The last piece, Copycat, has Sheppard and Swallow following Bley’s flirtatious piano with each adding embellishments along the way. As Copycat evolves, all three take turns in leading and echoing each other. It’s a marvellous feat of synchronised improvisation.

Bley is distinctive on piano throughout the album, Sheppard supple and circuitous on tenor and soprano sax and Swallow rich, warm and melodic on bass. Bley says “We’re essentially a chamber music ensemble and this allows me to write music for us free of bombast and exaggeration”. If you add “quirky”, “original” and “politically incorrect”, I think her words would likely trump any other description of this most intriguing album.

Brian Payne - 21 August 2020
When I first played this album I vaguely thought it to be just another troupe trying to emulate the sonic experimentalism of the late 60s/70s. But when I listened...