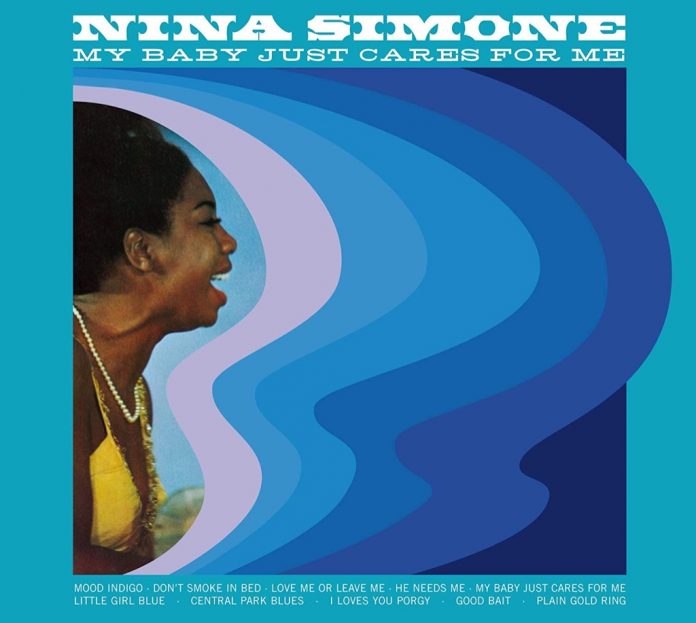 At the risk of raising the odd eyebrow I have to state that I have managed to navigate through the bulk of a lifetime with a radar untroubled by Nina Simone. I mention this only because I have just listened to her debut album, released originally as Little Girl Blue on Bethlehem in June, 1958, and now reissued on American Jazz Classics as My Baby Just Cares For Me. That track was one of the original 14 tracks on that debut album and languished in obscurity for 30 years until it was used to sell Chanel No 5 perfume in 1987 and became a global phenomenon overnight.

Virtually all I knew of Ms Simone until a couple of hours ago was that around half a century ago she recorded a song entitled I Put A Spell On You which went viral. I now know her to be a gifted (Julliard-trained) jazz pianist, composer, arranger plus a successful vocalist. The 14 tracks on the original album are supplemented by five singles for her second label Colpix plus one live version of one of them.

She omits the entire verse of Duke Ellington’s Mood Indigo and takes the song itself at a frenetic clip stripping it of all atmosphere or meaning. She is more respectful of Willard Robison’s Don’t Smoke In Bed albeit the song is “owned” by Peggy Lee, one of the few people to actually record it. She follows this with a second number associated with Lee; He Needs Me was one of two songs that Arthur Hamilton wrote for Ms Lee to perform in the film Pete Kelly’s Blues. Another verse goes missing in Larry Hart’s wistful Little Girl Blue from Jumbo albeit Simone inserts an intriguing Good King Wenceslas motif. The Walter Donaldson-Gus Kahn entry Love Me Or Leave Me is taken lickety-spit and is none the worse for it.

There are four instrumentals on the album, two composed by Simone herself but first up is the Count Basie-Tadd Dameron Good Bait which showcases Simone’s distinctive piano style. Plain Gold Ring is given a fairly ho-hum reading then comes the second instrumental, a reverent interpretation of You’ll Never Walk Alone. Back in 1958 her reading of Gershwin’s I Loves You, Porgy was the standout track and it’s not difficult to see why. Central Park Blues is an original swinger penned by Simone herself, He’s Got The Whole Wold In His Hands brings a touch of soul to the party whilst the J Fred Coots-Haven Gillespie ballad For All We Know, dating from 1934 and, with Little Girl Blue, the classiest ballad on the album, is performed bizarrely out of time. Another Simone original African Mailman is the last track on the original album. Of the bonus tracks Since My Lover Has Gone and If Only For Tonight are pleasant enough albeit undistinguished whilst I Want A Little Sugar In My Bowl sees Simone trying her hand at Bessie Smith.

All in all this is a fairly decent effort which will please Simone buffs.

Discography
My Baby Just Cares For Me; Mood Indigo; Don’t Smoke In Bed; He Needs Me; Little Girl Blue; Love Me Or Leave Me; Good Bait; Plain Gold Ring; You’ll Never Walk Alone; I Loves You, Porgy; Central Park Blues; He’s Got The Whole World In His Hands; For All We Know; African Mailman; Since My Lover Has Gone*; If Only For Tonight*; Nobody Knows You When You’re Down And Out*; Come On Back, Jack*; I Want A Little Sugar In My Bowl* Nobody Wants You When You’re Down And Out** (78.02)
Simone (v, p); Jimmy Bond (b); Albert “Tootie” Heath (d). New York, December 1957. *Bonus tracks + orchestra conducted by Stu Phillips (15-17). **Live performance at Lake Meadows Club, Chicago, 1960.
American Jazz Classics 90276

Simon Adams - 11 May 2021
Famously, Keith Jarrett, alongside Gary Peacock and Paul Motian, played at the Deer Head Inn back in 1992, when the Pennsylvania venue acquired new owners and Jarrett returned, 30...