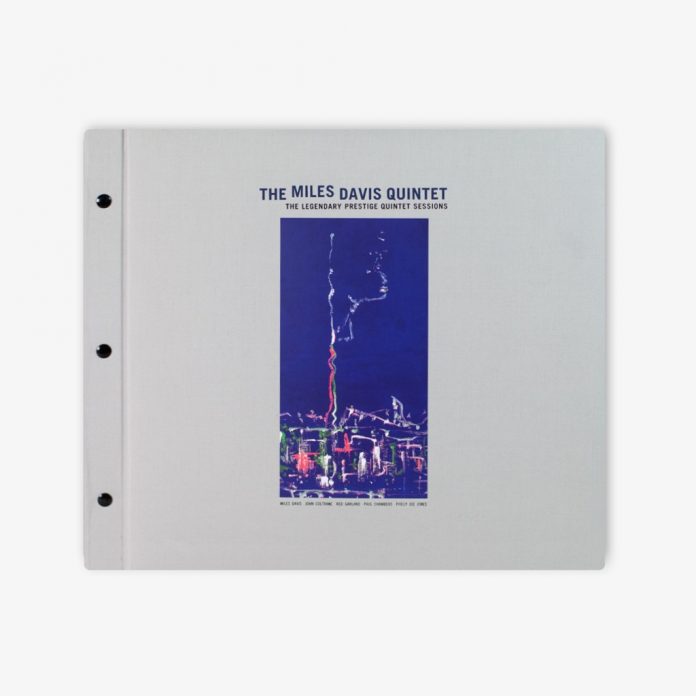 It is well known now that Miles Davis signed a recording contract with Columbia Records when he still had over a year to run on his Prestige deal and owed that company four LPs. The way Miles decided to honour his commitment was ingenious and one that few other leaders would have managed; he would record enough material for four LPs on two days of intensive recording, playing material just as the band did in the clubs every evening. Those four LPs – Workin’, Cookin’, Relaxin’ and Steamin’ – form the bulk of this great collection along with the quintet’s first, The New Miles Davis Quintet from 1955 and a whole LP of live sessions recorded in 1956 and 1958 at clubs in NYC and Philadelphia. Shortly after the October 1956 recording, Miles began his first Columbia disc, ’Round Midnight, and spent several days and much planning in producing it. Was it superior to the Prestige LPs? Most commentators would likely agree that there was little if any difference in musical quality but the four Prestige discs gathered a magical and in time legendary status.

In 1955 the band was new and it followed on from years of Miles touring as a single or with Philly Joe Jones as his drummer and talent scout, picking up rhythm section players for each gig. The new band, much criticised at the time as featuring a wispy trumpet player, an out-of-tune tenor, a cocktail pianist, a teenage bassist, and an overloud drummer, soon showed what it could do on that first LP.

The most striking thing on this lovingly remastered set is the warmth and invention of Miles, the strong distinctive sound of Coltrane’s tenor and the aggressive thrust of the rhythm section. Stablemates lopes along engagingly at a modest tempo and is melodically warm although The Theme and S’posin roar along at brisk tempos and produce ripe, inventive solos all round. I’ve been listening to most of the music on this collection regularly over the years on battered LPs and various CD issues and none produced the crisp “you are there” immediacy that these remastered vinyl LPs offer. The sound of Miles’s trumpet and Trane’s preaching tenor are caught vividly and Chamber’s bass is reproduced to perfection. Philly Joe’s drums have a crackle and driving surge rarely heard before. The combination of Van Gelder’s original recordings and modern, analogue remastering has brought these records to life as never before.

Bob Weinstock of Prestige issued all this material slowly with Cookin’ and Relaxin’ coming out fairly early and Workin’ later with Steamin’ not appearing until 1961. This collection presents the music as recorded in 1955, then the marathon May and later October 1956 sessions in chronological order. LP2 gives us a couple of rich ballads and a cooking Trane’s Blues followed on side 2 by another ballad and a flowing reading of It Could Happen To You and an intense Woody’n You. Such a balanced programme is ideal and you do have to wonder why Weinstock chose to present the music in such a haphazard fashion. Only LP5 presents the final Cookin’ session exactly as it appeared originally on Prestige. Except of course that Weinstock issued Cookin’ first. Oh well.

Then there were the times when Miles and Trane were feeling off or jaded and they would walk off and leave that great rhythm section to play alone and restore momentum. Here the three play an exquisite slow blues, Ahmad’s Blues, where Garland sets it up and the trio develop it and each has a solo. Small wonder it used to fire up the whole quintet. The band sail through Surrey With The Fringe On Top, Garland’s piano sparkling and Jones’s cymbal sizzling as Miles and Coltrane play their solos, Miles introspective and Trane urgent, burgeoning. It Never Entered My Mind is just one of the slow, ripe ballads that Davis could deliver so smoothly even if there was always a degree of tension in his tone. There are plenty of other examples on offer, not least You’re My Everything and the final track on LP5, My Funny Valentine. The two Thelonious Monk compositions have been put back together here although on the Prestige disc, ’Round Midnight was taken out and put on a later LP so that it didn’t clash with the Columbia recording. Both were similar. That final LP5 is a scorcher with hard-swinging readings of Airegin, Tune Up and a very tasty Blues By Five, a 10-minute blues workout where each musician has a solo. My Funny Valentine is a last, definitive version of the popular song played with soft focus and tight lyricism.

Finally, LP6 gives us a good sampling of those jazz-club nights and how close they were to the studio recorded versions. Much is similar but it is noticeable that the live versions do drive just that little bit harder and the intensity of the solos is more pronounced. And Coltrane in the 1958 Café Bohemia transcriptions is much more confident and even more inventive. The live audiences were obviously a spur to creation. Max Is Making Wax is a hard, exciting swinger and on Bye Bye Blackbird and Walkin’ we hear Bill Evans, who had just replaced Garland. Philly Joe would follow weeks later bringing to an end the great and for many enthusiasts the very greatest Miles Davis Quintet. Blackbird, from this session, has Evans fully integrated. If he and Philly Joe had stayed on what a great quintet that would have developed into. This last LP is from radio transcriptions and Craft have done a very good job on the original sound. It isn’t anywhere near Van Gelder standards but the engineers have certainly produced vivid, acceptable transcriptions of live music taken from broadcasts.

Mark Gilbert - 09 November 2020
It’s a 1980 recording done for the German radio station Norddeutscher Rundfunk, so the audio quality is exemplary - not something that can be said for all the previously...