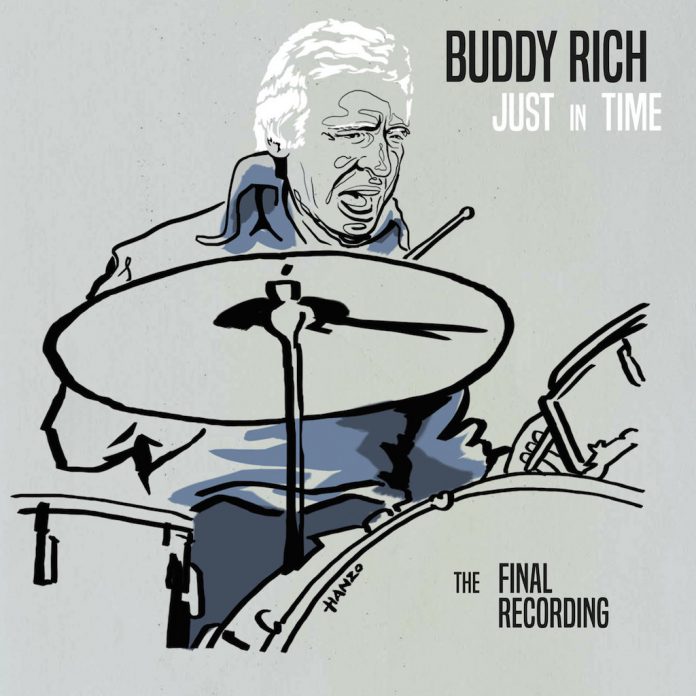 Recorded at Scott’s in 1986, this double LP turned out to be Buddy’s last recording in London and his last anywhere. He died in April 1987. Daughter Cathy says on the sleeve notes that it had taken her 33 years to get the records released but she never gave up.

Ronnie Scott announces the band, describing Rich as the world’s greatest drummer and the 15-piece orchestra roars into Wind Machine, a Sammy Nestico arrangement. This is charging, hard-swinging and shouting big-band jazz with a seasoned group of boppish soloists. Bob Bowlby on alto and Steve Marcus on tenor sax are well featured soloists throughout and Buddy takes short, explosive, technically faultless solos on most tracks but no long workouts. If his health was already failing by this time it doesn’t show in his energetic playing on every track. This was a hard swinging band that made complex section work and thrusting rhythm section playing sound easy and natural.

The enthusiastic applause and stomping from the audience all through shows that the band was much appreciated on these two nights in November. Much of the music on offer was written and arranged by the band’s pianist Matt Harris and there are three standards on offer. Just In Time and Love For Sale have warm, sturdy readings.

The best tracks are the last on disc 2 where the band plays a selection from Porgy And Bess. A medium tempo is employed for variations on I Got Plenty Of Nothing which slows down further as bass trombonist Jim Martin solos on Bess, You Is My Woman Now and the tempo goes into overdrive for the final It Ain’t Necessarily So. Steve Marcus is also featured. Finally, Buddy’s daughter Cathy sings with the band on Twisted, making a good job of the Annie Ross lyric but although Ross is credited on the liner information, no mention is made of the music’s composer Wardell Gray who recorded the original blues line back in the early 1950s. Steve Marcus has a muscular tenor solo and the concert ends with Rich introducing his musicians and talking about the best jazz club in the world. “I didn’t say that because Ronnie is here”, he says, “but he asked me to say it”.

So ends a good night at Scott’s, the music very well mastered and cut on two LPs and the only mystery being how long it has taken to put out Buddy’s last session. Better late than never though.