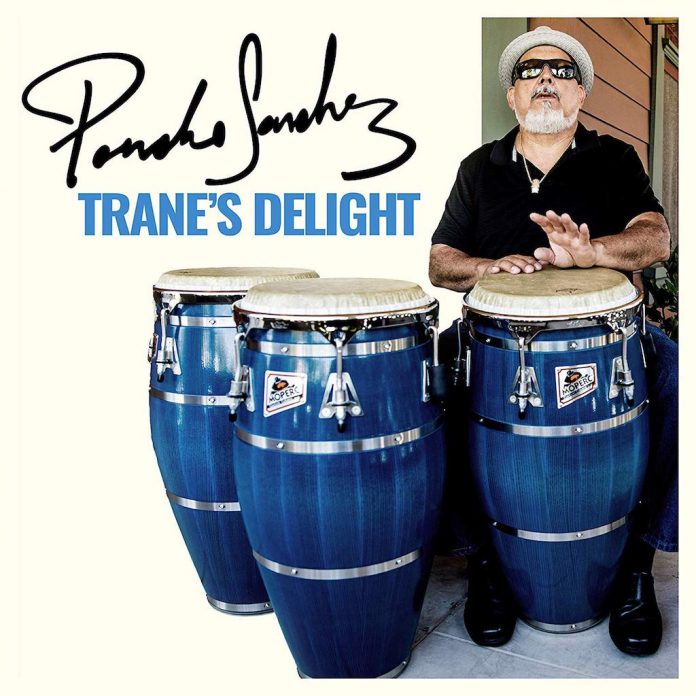 It’s been eight years since master conguero Poncho Sanchez and his Latin band made an album. Trane’s Delight is their 27th and it’s been issued to celebrate the music of John Coltrane who’s been an enduring influence throughout Sanchez’s career. Sanchez grew up in Los Angeles listening to Coltrane’s music on the radio and when he was 14 he spotted the LP Coltrane in a shop window. After some weeks he’d saved up enough money to buy it and he says the music has been imprinted on him ever since.

Three of the 11 tracks on the album are Coltrane classics delivered with a strong Latin twist. Blue Train becomes a cha-cha with scintillating alto from Robert Hardt. Giant Steps is a mambo propelled at breakneck speed by Sanchez’s quick-fire congas. Liberia becomes a hard-bop salsa with exquisite trombone from Francisco Torres who arranged much of the music on the album. There’s also The Feeling Of Jazz, Coltrane’s 1962 bluesy collaboration with Ellington, now transformed into a sparkling cha-cha and prompting an impassioned conga cadenza.

Trane’s Delight effortlessly combines modern jazz with Afro-Cuban rhythms. Sanchez’s long-time ensemble has perfected its delivery through years of performing together. The agility of their interplay is remarkable – it’s an album from the top drawer.

Jazz Journal - 28 May 2019
This is called the "real" Konitz because Konitz himself feels it to be his best recorded work to date. Lee himself chose the material and the company to make...