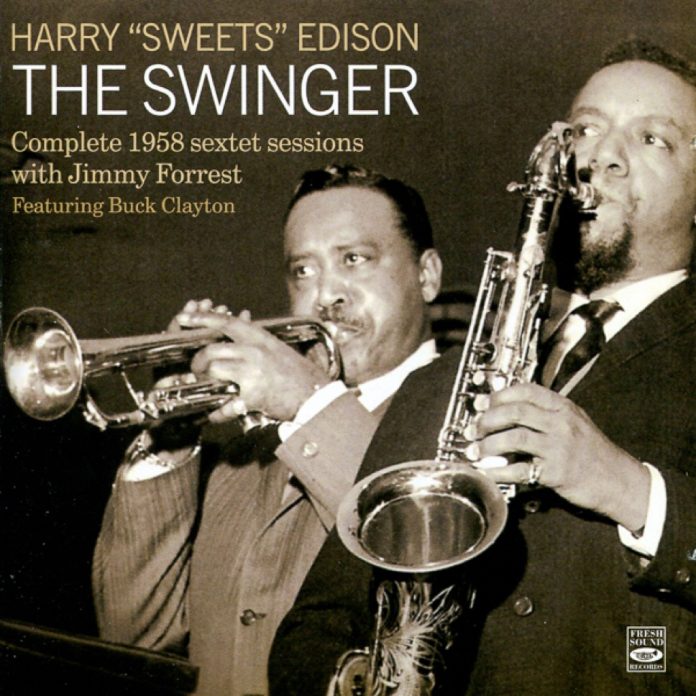 It takes all of two minutes of the first track before the first cliché hits, and then they keep coming. The dynamic trumpeter had been dragged from obscurity by Nelson Riddle and Sinatra in the early 50s, and by the time he’d gained stature in 1958 we were fairly exhausted by those quotes and piling-up riffs. But, considering what a fine player he was with such a part in jazz history, it’s important to overlook his peccadilloes. Here he’s in his element. He was a great dispenser of energy, but on several tracks, he’s rather trumped by the good taste and delicacy of Buck Clayton (try the opening solo on Come With Me). But Buck couldn’t take a group by the scruff of the neck and swing it along the way Harry did.

A couple of years earlier Harry had recorded the album Sweets for Granz with Ben Webster and Jimmy Rowles. Those three comprised the First Division, and this lot is very much the Second. Here Jimmy Jones gives a fine exhibition of chorded accompaniment, but he never had the jazz soul of Rowles, nor did Jimmy Forrest have the credentials of Webster.

On the other hand, Harry never varied, whilst his surroundings changed continually. One always knew what to expect, but what he served up was basically so good that it earned him a lot of indulgence.

Forrest’s history is quite remarkable if you wish to do some delving. The St Louis tenor man began on the riverboats with Fate Marable in 1935 and then went through the big bands of McShann, Kirk and Ellington (pinching Happy Go Lucky Local from the latter on the way). In 1972 he enrolled in the Basie band. But his distinguished roll-call and eloquence was kept from the foreground by a comparatively pinched tone – he couldn’t match Webster or the Kansas City and Texas tenors in that department, although I must admit that he is more interesting throughout this collection than I’ve heard him before. He had no trouble creating well-formed solos and he was certainly good at swinging whilst expressing himself. Joining Basie in 1972 at the end of his long career he had a better grasp of modern jazz than any other mainstreamers, which was remarkable for one who had begun so many years before.

It has to be owned that Buck’s exquisite solos stand out – his ballad All Depends On You is beautifully restrained and lyrical. I realise that Jimmy Jones is a very fine pianist, competent in everything he touches, but I have to own that, for no good reason, I have always been impervious to his charms. But there are no complaints about him here. All the rhythm players live up to their reputations and so this is a very muscular and pleasing hunk of mainstream. For most of it you know what you’re going to get. The various tracks sustain a very high level with no weak points. The only one is that Pussy Willow is a different tune from the Pussy Willow that Harry wrote for the Granz session. Eddie Costa is added on vibes for Critics’ Delight. He’s under-employed.

Six tracks from this album and seven from Sweets are included in Avid AMSC 1037 by Edison.