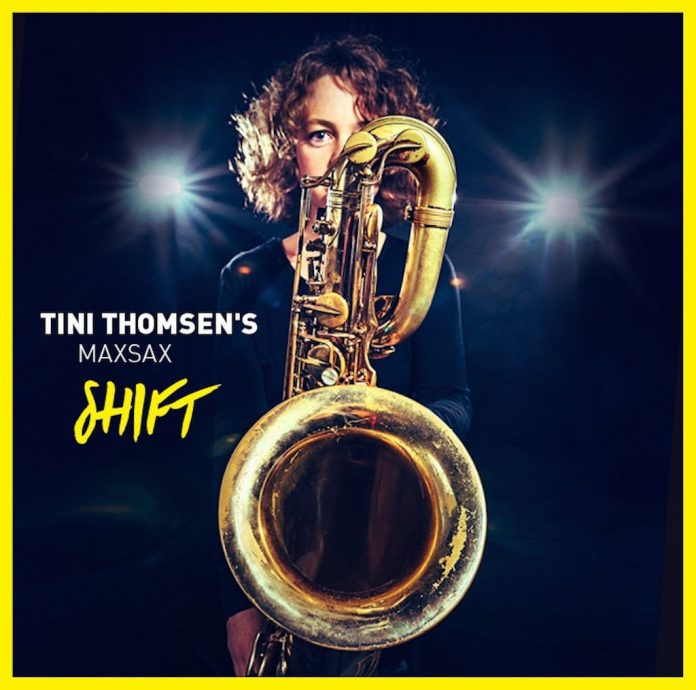 Rock-driven jazz-funk is hanging around longer than rock itself, which perhaps was only to be expected. This is because one continues to discover, beyond its metronomic thud drumming, more satisfying elements. On that score jazz musicians almost always deliver in terms of interesting arrangements and sounds.

The German saxophonist Tini Thomsen, now based in Amsterdam, has hauled the bari on to the scene in her MaxSax quintet and her quartet Q4. The British saxophonist Nigel Hitchcock plays in both, bringing with him the background of a Sanborn-influenced presence in a multitude of pop and rock settings, including with Mark Knopfler, Sheena Easton, Gary Barlow and Boyzone, He was also, of course, a member of the award-winning saxophone quartet Itchy Fingers. Hitchcock’s a jazzer with all-round credentials.

In MaxSax he occupies the higher reaches in an often big and heavy sound, with Tom Trapp’s guitar always threatening to become airborne (but mostly behaving itself – note his sideline buzz on the opening King Of Diamonds) and Thomsen admirably refusing to “feminise” the bari’s often lumbering propensities. Shift is a good example of the way she employs the two-horn front line to shake the mix into a cohesive structure, drawing Mark Haanstra’s bass and Joost Kroon’s kit into the building process.

In defiance of the rock tradition, she doesn’t let anyone surf for too long, preferring arrangements in which all are in close contact and gainfully delegated. But, in matching resources to character, she will allow someone to have a more significant presence – Hitchcock in Gospel Tune, for instance, with its core wailing and brief call-and-response episode, and herself wittily negotiating Little Lily’s Shoe against a guitar riff before density and force grow.

Thomsen and Trapp, who share the composer credits, with Hitchcock helping out on the amusing Petal#6, don’t allow the leaden drumming tropes of rock to limit their creativity too much, adding the mixed percussion of Miles Bould on Bitter Sweet Harmony to subvert it further.