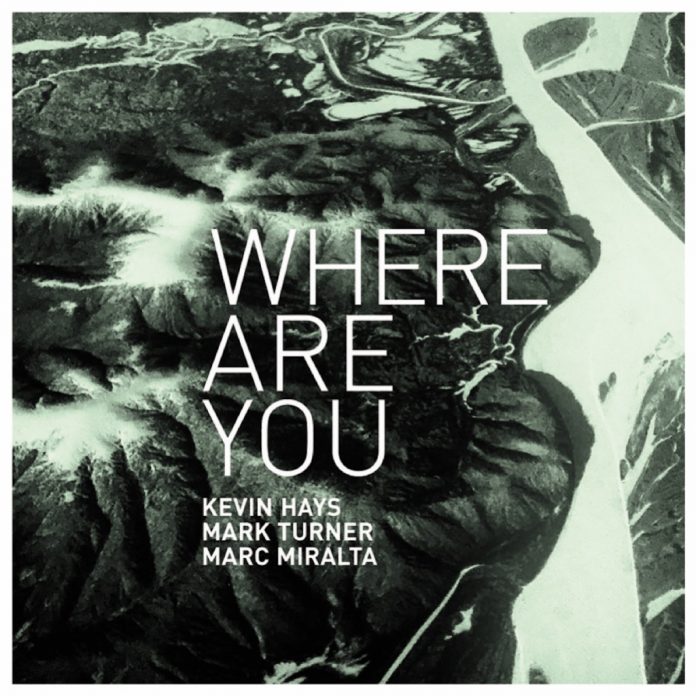 This bass-less trio have between them some impressive CVs. Kevin Hays is a Grammy-winning American jazz pianist and composer. He made his first recording as leader in 1990 and has gone on to record more than 20 albums as leader or co-leader. He has played with Eddie Henderson, Sonny Rollins and Brad Mehldau.

Mark Turner is an American saxophonist and the ultimate jazz sideman. He is also member of Fly with Larry Grenadier and Jeff Ballard. In 2014 he released an album as leader on ECM (Lathe Of Heaven) and again in 2018 (Temporary Kings, with Ethan Iverson). His credits include Jimmy Smith, Aaron Goldberg, and Lee Konitz. His work rate is prolific having played on eight different jazz albums in the last 20 months.

Marc Miralta is a Spanish drummer. He has performed with musicians such Pat Metheny, Gary Burton, Wynton Marsalis and Art Farmer, as well as recording over 60 CDs with a variety of artists.

Where Are You is the trio’s first recording and the result is a thoughtful, creative and engaging piece of music. They each contributed music to the album as well as some new arrangements for Charlie Parker’s Donna Lee and Ornette Coleman’s Law Years.

The style is modern with the emphasis on modal rather than melody. A number of the tracks are fast and furious in their pace allowing each member amble opportunity to shine. Other tracks are much slower, delicate and atmospheric. Turner’s playing on Please Remember Me is almost Garbarek in style and sound. My favourite is Coleman’s Law Years and Waltz For Wollesen – less of a waltz and more of a New Orleans Blues.

All in all, a fine album from some fine musicians. Recommended if modern is your thing.

Derek Ansell - 13 July 2021
This new reissue offers two Holiday albums on one compact disc. The first was originally issued with the above title by Verve in 1956. Although blues-based, the songs chosen...