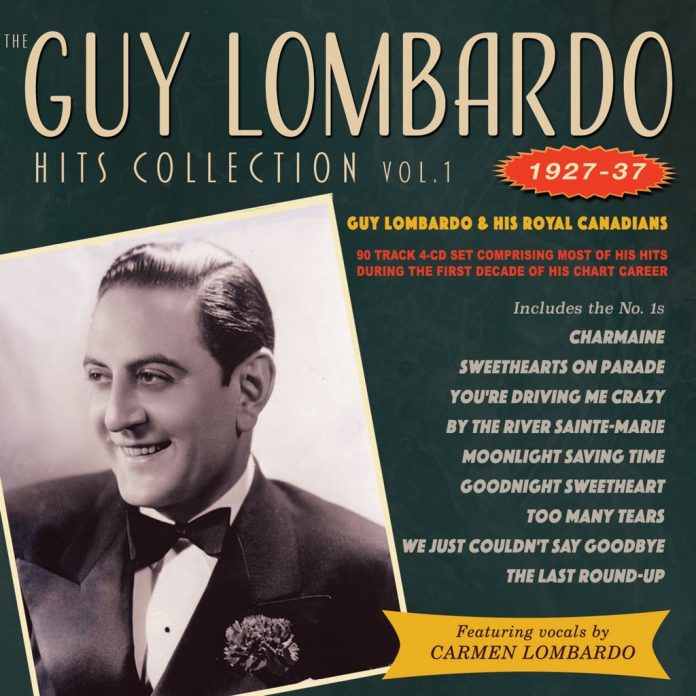 Guy Lombardo and his Royal Canadians, sporting the banner “The sweetest music this side of heaven”, were probably the most popular of all. Their records sold in literally hundreds of thousands. Unlike jazz, sweet music doesn’t attract the kind of fan who wants to know who plays what on which record, so there are no personnel listed for these 193 tracks.

It’s not even easy to sort out the instrumentation, with the amount of doubling that seems to have been going on. However, the four Lombardo brothers are probably among those present: Carmen (as, voc). Victor (ts?, as?), Lebert (t, d) and, of course Guy, who was a violinist, although there isn’t much evidence of it here. There’s often a flute, and a couple of clarinets from time to time.

The sound of the saxes, blowsy vibratos in full sail, is the strongest characteristic, not just of this band but of the entire genre. It’s the corny sound that saxophonists still mimic when they want to raise a laugh. But, credit where it’s due, the section teamwork here is absolutely spot on. The bass is certainly a tuba or sousaphone, until at least the mid-30s, and maybe a bit later. Small brass section (lot of mutes), piano (two on occasion), guitar, drums (subdued). Melody well to the fore, sometimes with a simple counter melody, simple harmonies. Frequent key changes. Lots of vocals.

It’s called easy listening, but it’s quite hard work if you really try to listen, because everything is so bland that it defies concentration. But you’re not supposed to be concentrating anyway; you’re supposed to be floating along in a delightful daze.

Discography
Vol.1 1927-37. Four CDs, 90 tracks, including: Sweethearts On Parade; Go Home & Tell Your Mother; By The River Sainte Marie; Street Of Dreams; Shadow Waltz; Inka Dinka Doo; My Old Flame; Love In Bloom; Stars Fell On Alabama; Cheek To Cheek; Red Sails In The Sunset; A Fine Romance; The Way You Look Tonight; September In The Rain (276.38)
Vol 2 1937-54. Four CDs, 103 tracks, including: The Love Bug Will Bite You; It Looks Like Rain In Cherry Blossom Lane; Deep Purple; St Lois Blues; South Of The Border; Intermezzo; The Trolley Song; No Can Do; June Is Bustin’ Out All Over; April Showers; I’m My Own Gran’pa; Hop-Scotch Polka; The Wedding Samba; Hernando’s Hideaway (278.14)
Personnel and dates and places of recording not listed.
Acrobat ACOCD 7139 (Vol 1) & Acrobat ACOCD 7140 (Vol 2)

Elliot Marlow-Stevens - 18 May 2020
Over the past five decades, since the inception of jazz fusion, Trilok Gurtu has distinguished himself at the pinnacle of musicianship within the genre. As the drummer for John...