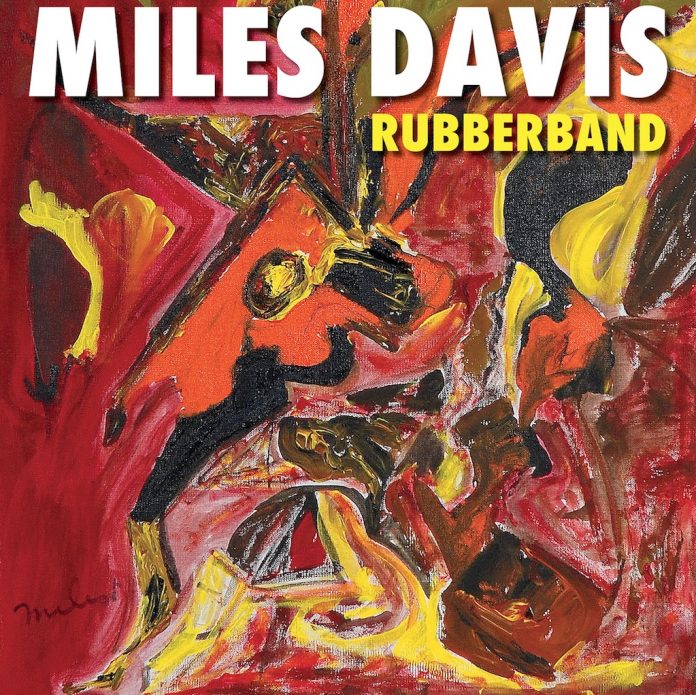 Anyone insouciantly dismissing Rubberband as just another cashing-in exercise amongst a swathe of “lost” recordings should do so at their peril. This is certainly not the case. This recording represented the transition between Miles leaving Columbia and signing to Warner. However, the provenance of this record is fascinating. Now signed to Warner under the ultimate direction of its head of jazz, Tommy LiPuma, Miles, never a prolific composer, began to reach out to former contacts who might be able to assist in the construction of a new album. Those who received a call but for one reason or another never made it to the recording stage included Paul Buckmaster, Bill Laswell, Steve Porcaro and George Duke.

But there was one contact who had relatively recent history with the trumpeter. Randy Hall had been involved in the recording of The Man With The Horn (Columbia, 1981). Hall instantly recognised the rasping voice on the other end of the phone making the sort of offer no musician could refuse “Randy, I want you to produce my next album”. At the time Hall was recording at Ameraycan Studios in North Hollywood with Zane Giles on his new album. Hall then asked Giles, a multi-instrumentalist, if he would like to co-produce Miles’s new album.

The two set about writing new material for the prospective album at Giles’s home studio and then would play the results to Miles. The recording for the Rubberband sessions began in October 1985 extending to early 1986 due to Miles’s European touring commitments. The first session actually commenced on 17 October 1985 with the title track. Rubberband represents a true bridge between the final Columbia records and Miles’s debut Warner release Tutu (Warner, 1986).

Examples of some similarity between the two albums can be heard in the ostinato bass thrum of See I See and the electro-funk of the title track, which features Mike Stern guesting on guitar. The calypso-infused Paradise offers unexpected warmth, whereas Echoes In Time/The Wrinkle harks back to the riff-richness of the earlier comeback albums. There are four vocal tracks too, such as So Emotional, featuring Lalah Hathaway. But these fit unobtrusively into place and add to the diversity of this intriguing record, replete with funk, rock, soul and jazz. There’s also the sporadic bonus of Miles’s inimitable voice as heard, amongst other occasions, at the start of Paradise: “If you don’t mind, we’d like to play something for you”.

Despite all parties involved in the making of Rubberband being satisfied with the result (including Miles), LiPuma was distinctly underwhelmed, feeling it was not the right direction for Miles at that time. Consequently the project was deliberately shelved (so not strictly lost) and instead Tutu became Miles’s Warner debut with its chief composer Marcus Miller playing all the parts except trumpet.

Around four years ago the Miles Davis estate was approached with the suggestion of releasing Rubberband tracks. This was enthusiastically welcomed and Hall and Giles became involved once more along with Vince Wilburn Jr (Miles’s nephew and drummer on the sessions). But the tapes were in bad shape and had stretched, making remastering problematic. The tapes were transferred digitally and other parts were eventually added, often live.

Although Rubberband is not without a few shortcomings, in comparison with the flawed and arguably ill-advised Doo-Bop (Warner, 1992), it’s a satisfyingly enthralling minor masterpiece. For an exhaustive and definitive documentation and track-by-track summary of Rubberband, George Cole’s The Last Miles – The Music Of Miles Davis 1980-1991 (Equinox, 2005) is essential. Incidentally, Cole also wrote the sleeve notes for this release.

Michael Tucker - 04 July 2021
Inspired to pick up a saxophone as a youngster by the lively funk of Candy Dulfer, the Swiss Johänntgen has long developed into a wide-ranging improviser and composer. Her...