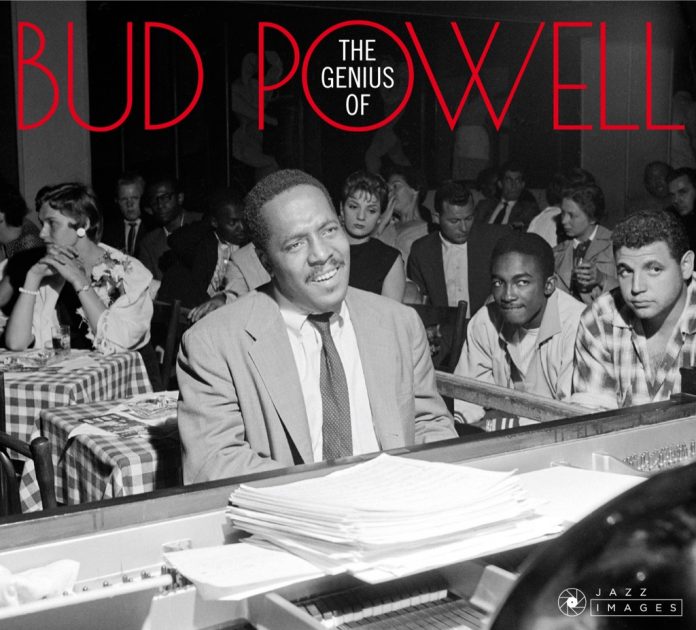 Broadly titled, this highly desirable new two-CD set is actually a collection of four albums by Powell, rather than the one original album that the title implies. The four albums are The Genius Of Bud Powell and Jazz Giant from recordings in 1949-51, with Powell at his peak, and Piano Interpretations By Bud Powell and Blues In The Closet from 1955-56, which although of interest, aren’t up to the incredible heights he achieves on the earlier dates.

As can sometimes be the case with jazz reissues, it would be easy to become confused with various releases that share the same title, but have different content. I first encountered The Genius Of Bud Powell as a Verve two-record vinyl gatefold release, which, as it happens, has the same content (albeit in a different track order) as the two original albums The Genius Of Bud Powell and Jazz Giant which are represented on CD1 of this new release. Also, in this case we have a different title for the same solo piano recording, compared to another release – here on CD1 we have the track Dusky ‘n’ Sandy, whereas on my aforementioned old vinyl copy it’s entitled Dusk at Saudi. Anyway, it’s best to just enjoy Bud’s unique solo piano style, rather than worry about track and album titles.

These two original albums remain some of my favourite Powell recordings, alongside The Amazing Bud Powell Volume One (also recorded in 1949-51), but The Genius Of Bud Powell offers the advantage of hearing him in solo mode, as well as trio. He’s unusual in some ways as a solo jazz pianist, as he doesn’t tend to fall into the habit of playing less uptempo tunes when unaccompanied. The absence of other rhythm section members seems to make no difference to Powell – such is the strength of his tempo and right-hand solo lines that he continues to play uptempo material with his usual driving feel, and searing solos. These are the recordings that anyone unsure of Powell’s genius needs to hear, as they’re a world away from his later inconsistent efforts where extremely poor treatment and ill health had clearly taken their toll.

Not a great deal is said of Powell’s compositions, but they’re great tunes, at least on a par with those of e.g. Monk, Dameron, and Gillespie – is there a more beautiful, arching melody than his tune Celia, from the original bebop period? Also, there can be few tunes around that time that had the drama and intensity of his Tempus Fugit.

In terms of audio quality on this new release, there’s a fair bit of wow and flutter on CD1, but that isn’t evident on CD2 which also has the benefit of better recording quality, but then it’s a lesser experience in terms of musical performance. For me, that lesser performance on CD2 dilutes the stunning effect of CD1, which would have made a more poignant release on its own. Still, it’s an attractive gatefold CD product, with high-quality, historic photos and a 16-page booklet with original liner notes. If you’ve not heard this material previously, play CD2 first as a warm-up and then prepare to be completely blown away by CD1.

Jazz Journal - 31 May 2022
Since he came on to the London scene in the early seventies, Allan Holdsworth has joined the small band of electric guitarists - among them Charlie Christian and Jimi...