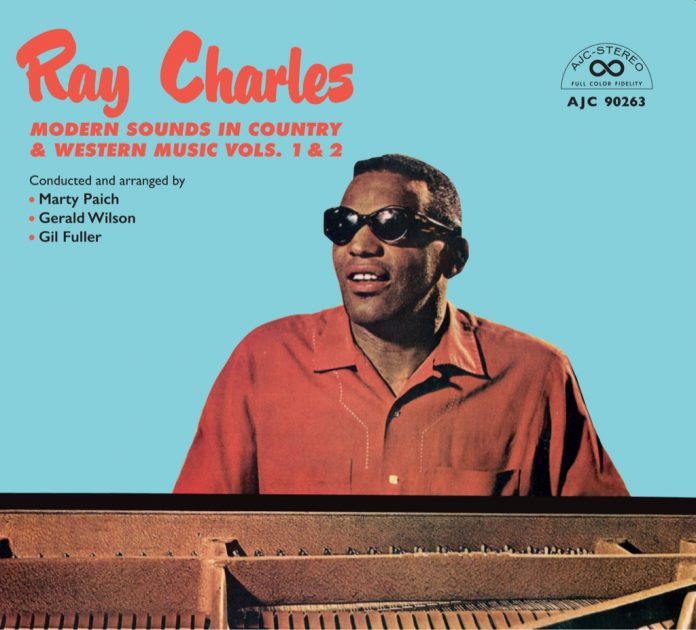 You’ll be lucky to extract even condescending praise for Ray Charles from the jazz establishment. The Penguin Guides pretend he never existed. The truth is that he was a virile, gifted jazz singer and pianist, who had the most dreadful handicap in his blindness and who surmounted it with the most admirable courage, leaving behind a lot of great jazz music when he went.

And if ever there was an album title to put the establishment boys off, then it’s here. I would never have dreamed, originally, of listening to these two albums had it not been for Alun Morgan, who directed me to them to find some very fine jazz. You can ignore the “When my woman left me my dog got run over at the crossroads” syndrome. These songs are better than that and only repulsive when they are wailed by a half-drunk tone-deaf cowboy or by his similarly endowed menopausal woman.

What this CD presents is Ray’s rugged, but medium-star-filled band, shouting out backgrounds to Ray’s normal high-quality blues singing and magical blues piano. The backgrounds are the creations of Gil Fuller and Gerald Wilson who arrange and conduct with Marty Paich taking care of the occasional supplementary strings.

The sleeve makes much of Ray’s altruistic idea in converting “C&W” to his idiom. Don’t let them kid you. He did it for the money.

Let’s not go over the top. This isn’t the best jazz you ever heard, nor does it have the slightest cultural significance. But if you want to enjoy yourself, then it’s quite inspiring and probably supercharged by listening with a drink. Good, as they say in the vernacular, on yer, Ray.

As long as you don’t use the lyrics as a philosophy, you shouldn’t come to much harm.

Discography
Bye Bye Love; You Don’t Know Me; Half As Much; I Love You So Much It Hurts; Just A Little Lovin’; Born To Lose; Worried Mind; It Makes No Difference Now; You Win Again; Careless love; I Can’t Stop Loving You; Hey, Good Lookin’; You Are My Sunshine; No Letter Today; Someday; Don’t Tell Me Your Troubles; Midnight; Oh, Lonesome Me; Take These Chains From My Heart; Your Cheating heart; I’ll Never Stand In Your Way; Making Believe; Teardrops From My Heart; Hng Your Head In Shame; At The Club (77.57)
Ray Charles Big Band with the Raelettes, conducted and arranged by Gil Fuller, Gerald Wilson and Marty Paich. LA, February 1962 & September 1962.
American Jazz Classics 90263

Norman Johnson: The Art Of Life