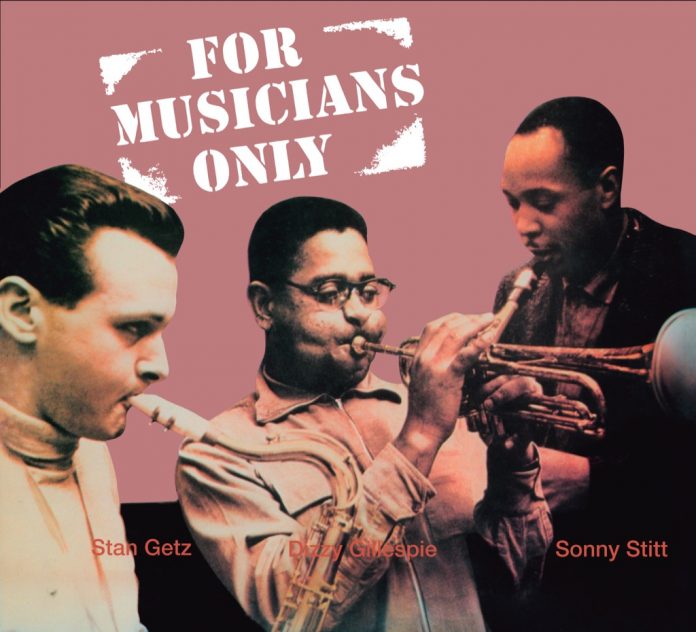 When I first bought this recording more than 50 years ago I thought the album title was ridiculous and I still do, but the music, as they say, is something else.

It took place a year before Dizzy Gillespie and Sonny Stitt appeared on a couple of albums together with Sonny Rollins. Here they are joined by Stan Getz who had been appearing with them on a JATP tour which is why Norman Granz recorded them for his Verve label. Getz had recorded with Gillespie before but this was his only studio meeting with Stitt who was a close personal friend. Years later he said, “With Stitt you’ve got to work. He doesn’t let you rest or you’re left at the starting gate.”

The frantic pace of Bebop (86 bars to the minute!) might have been a baptism of fire for Getz but as he demonstrated on his famous 1955 recording of Shine with Conte Candoli he could handle extreme tempos with aplomb. Both Dizzy and Sonny were creative even at super-fast tempos and along with the hard-working rhythm section they don’t put a foot wrong, although there is a minor car crash towards the end of Bebop. At the start of an extended series of exchanges with Stan Levey, Stitt initially thinks they are 16 bars in length but soon remedies the situation and falls into the correct eight-bar pattern.

Dark Eyes had become associated with Charlie Ventura and Gene Krupa in the 40s. Here it’s an outstanding example of Stan Getz at his very best, no doubt encouraged by the audible cries of approval from his colleagues during a long solo that ranks with the best of his late 50s work.

EJC has added an alternative take of Dark Eyes not included on the original album together with two titles from a Chicago JATP concert and Gillespie is pretty sensational on Now’s The Time and Wee.

This concert took place the day after Stan Getz and J.J. Johnson recorded their classic collaboration at the same venue (Verve 831 272-2).

Derek Ansell - 28 May 2019
David Murray’s long time pianist, Lafayette Gilchrist, here gets his chance to record solo although this release is actually his second album. The opening selection For The Go Go...