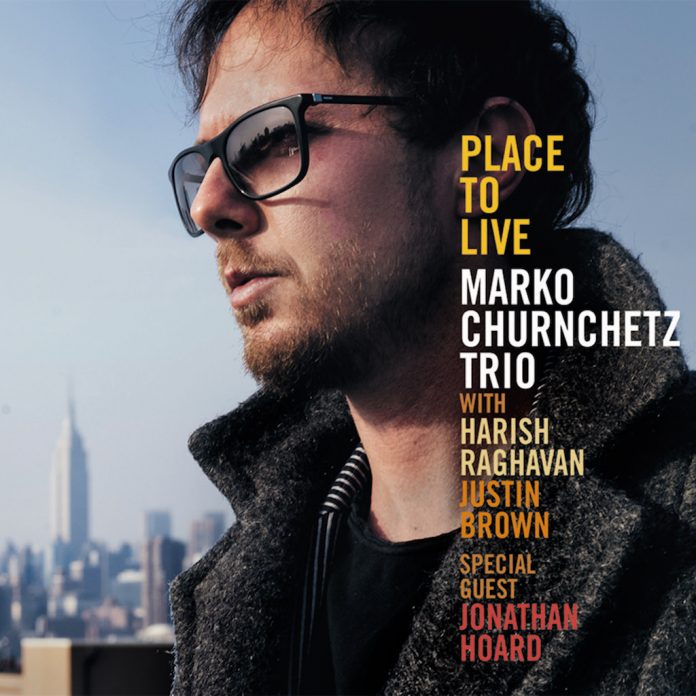 This is Churnchetz’s follow-up to the excellent Ruthenia from 2017, which I reviewed in JJ. The Ruthenia album was a retrospective of Russian composers of the 20th century, played by his then rhythm section plus an 11-piece orchestra. It was recorded in his native Slovenia and also in NYC, whereas Place To Live is very much a Brooklyn, NYC styled affair in terms of material, playing and sound, the leader sometimes venturing onto the electro-mechanical Fender Rhodes piano as well as the acoustic variety.

In this new context, Churnchetz sounds quite like Mehldau, Yahel and a number of other contemporary US jazz pianists, which is no bad thing, but there again his sound here is perhaps less personally distinctive than on his previous release.

Listening to the first three tracks (the self-penned opener, Churnchetz’s arrangement of Coltrane’s Countdown,and Metheny’s Bright Size Life) I had the feeling that I was in for a heavyweight contemporary piano trio experience, and much of the album is indeed that. However, what changed the album for me was the introduction of vocals on the title track (vocalist Hoard co-composed this with the leader) and Monk’s Ask Me Now.

Whilst the vocals are in keeping with the style of the music, they’re very much a guest appearance on a couple of tracks, and they somehow had the effect of diluting the piano trio experience in the middle of the album, just as they were gaining momentum. That said, it’s worth noting that the vocal overdubs were recorded on a separate day, over a month after the trio’s efforts, so it’s a fine performance by both vocalist and trio to make that work on a jazz recording.

The high-tempo version of Shorter’s Pinocchio restores the momentum, complete with a drum work out for Justin Brown, followed by a great version of Kenny Wheeler’s Nicolette. The trio’s efforts were recorded in just one day, which for a full album is pretty quick work, and overall it’s another fine album by Churnchetz – but I’d rather hear more of the trio on their own.

Jazz Journal - 27 December 2021
Well, I like Bo Diddley. Even some of my friends regard my taste as appalling, but I am adamant - Bo is not only an exciting singer but also...

Jazz Journal - 29 March 2022
Sun Ra is now totally committed to elec­tronically-induced sound and his writing and soloing is dominated by it. Surprisingly his horns and percussion accommodate this development completely. Space still...