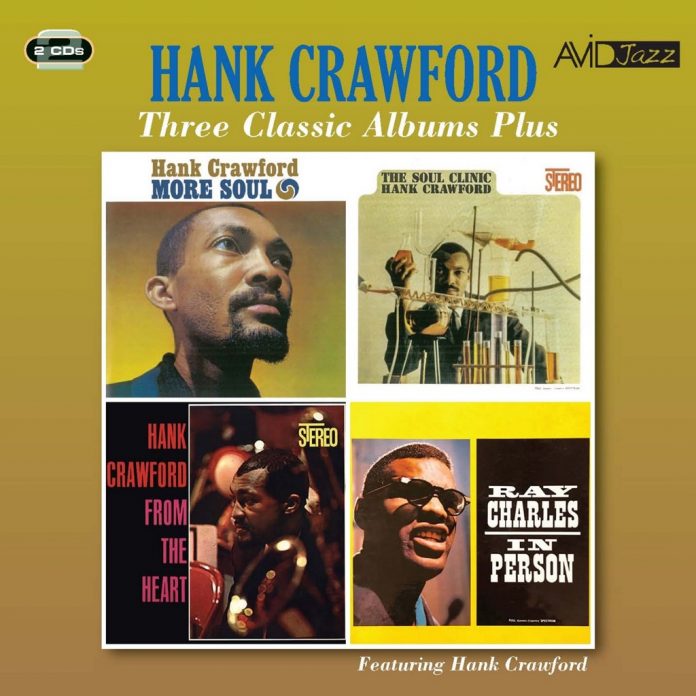 Hank Crawford, who was Ray Charles’ musical director, is joined by some of his fellow sidemen here who take the opportunity to really let their hair down on a stimulating set of blues, standards, soul tunes and ballads. The More Soul sleeve-note mysteriously refers to three titles being included – Doodln’, The Preacher and Sermonette – but they do not appear and Tom Lord’s discography does not mention them either.

James Moody’s Boo’s Tune was introduced by the composer as a delicate flute feature in 1956 but here it is a medium-tempo swinger giving everyone a chance to introduce themselves. Angel Eyes, one of the most soulful torch-songs, is a perfect vehicle for Crawford’s passionate alto.

Four Five Six is all Leroy Cooper. He was a big man apparently weighing around 300 lbs at the time with a suitably big, beefy Sahib Shihab-like sound on baritone. He is a veritable force of nature here as he storms through eight inspired choruses of the blues. Dat Dere with its intriguing alternate theme was the sequel to Bobby Timmons’ Dis Here and it finds Crawford at his most expressive while Sister Sadie is a feature for the muscular tenor of David Newman.

The leader displays his Sonny Stitt influence on an intense Please Send Me Someone To Love. It’s taken a little faster than Percy Mayfield did on his 1950 hit but it works really well. A highlight on Soul Clinic is Phillip Guilbeau’s lyrical interpretation of What A Difference A Day Made – the extended, unaccompanied coda is worthy of something Clifford Brown might have created.

The final seven tracks from 1959 were originally issued as Ray Charles In Person and they include some of the great man’s hits like The Right Time, What’d I Say and Drown In My Own Tears. On The Spirit Feel and Frenesi, Hank Crawford proves to be just as fluent on the baritone as he was on the alto.

Gareth Thomas - 13 August 2019
Ragajazz – as the name suggests – is a fusion group that blends Indian classical raga and jazz into one coherent musical whole. Made up of Scandinavian jazz musicians...