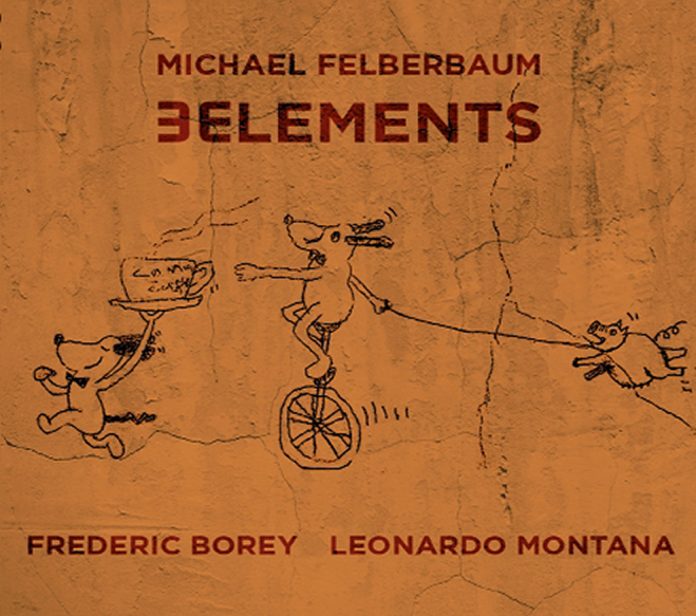 Italo-American guitarist Michael Felberbaum seems to be so aware of the advantages and dangers of working without bass and drums that his 3 Elements trio sounds phenomenally self-sufficient and relaxed. He plays electric and acoustic guitar, Borey the soprano and tenor saxophone, and Montana the piano and Fender Rhodes; the instrumentation provides interesting permutations which Felberbaum, the composer of eight of the 12 charts, juggles discreetly.

A trio without a drum kit and to a lesser extent a bass places itself in the chamber-jazz tradition but there’s still plenty going on. A drone on the ambitious title track gives way to repeated rhythmic patterns. These herald a region in which all three musicians wander uncertainly before joining each other and moving on. A transparent surface is created in the ballad-like Black Hole Sun from which soprano sax and guitar glide away, singing together. Ava has a garrulous exchange between sax and piano over an overtly-plucked guitar line. On The State Of Things the atmosphere becomes febrile and things run down.

Throughout there’s variety of motion and inter-connection, from the contrapuntal to the subtly harmonic and simultaneous. It turns boppish for guitar and tenor on Gilmore, and al fresco for Janis Joplin’s Mercedes Benz on which the pianist works overtime on an ever-changing backdrop.

One can never be sure how long jazz talent should be regarded as “new”. Felberbaum recorded an album called Sweetsalt for Fresh Sound in 2007 with a quartet that also included piano, bass and drums. Ten years later on the same label came Lego, again with the same instrumentation. In 2004, for the French company Nocturne, he’d made his recording début in a quartet with saxes instead of piano. Fresh Sound boss Jordi Pujol must surely believe that what’s “new” about this latest album is not the talent but the concept. And he’d be right.

Sally Evans-Darby - 04 July 2019
If ever a disc could transport the listener direct to Paris, circa 1955, in the heat of a jumping jazz club, this is it. From the off the sound...