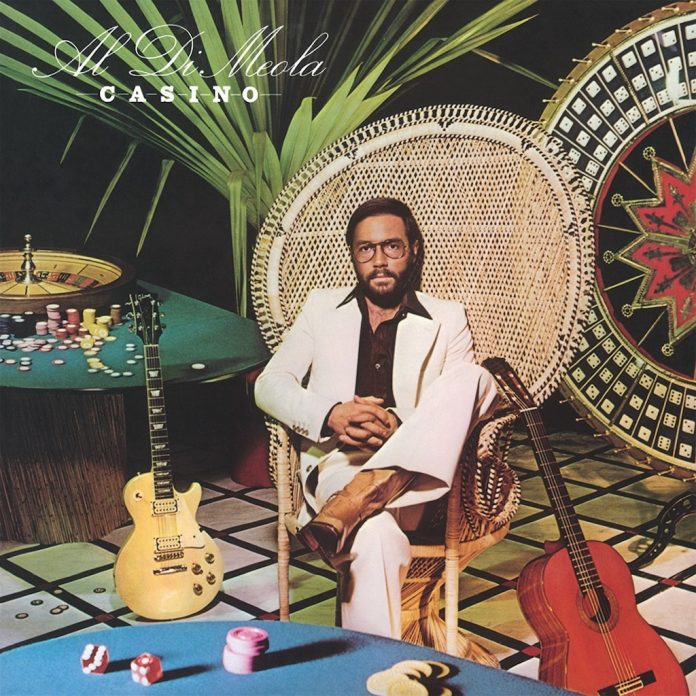 This exotic fusion programme from 1978 features Di Meola playing electric and acoustic guitars, and on Fantasia Suite For Two Guitars much more. There he dubs in mandolin, bongos, congas, foot stomps and castanets, the last named providing a driving, clattering rhythm throughout the composition. This is truly a comprehensive DIY job with the rest of the band standing down for seven minutes.

Sticking to electric guitar but playing a wild high-energy solo in the upper register, Egyptian Danza benefits from Steve Gadd’s explosive drums in a modern jazz and rock style fusion along with Barry Miles on electric piano and organ and Anthony Jackson providing a strong bass line on electric bass guitar.

The amount of energy generated by the electricity is quite impressive, although at times these tracks are virtually indistinguishable from the output of other progressive rock groups that flourished in the 1970s. Gadd in particular seems to be adept at mixing up jazz and rock and providing the ideal backing for the solo bursts.

Di Meola has the lion’s share of the solo output although Barry Miles is busy all through on electric piano, organ, MiniMoog and, occasionally, acoustic piano. Mingo Lewis is also on hand to add extra congas and bongos on some tracks.

Lewis, Miles and Gadd all combine to provide a roar and clatter of percussion on the title track as Di Meola soars high and wild with an improvised solo in the high treble followed by a more lyrical passage where he swaps four and eight bar phrases with Barry Miles on electric piano.

Miles is also in evidence on Chick Corea’s Señor Mouse on electric piano, organ and MiniMoog. The leader is at his most inventive and rhapsodic on this track and his solo feature Fantasia Suite.

Overall the music seems to define the era of electric jazz, following on from Miles Davis’ Bitches Brew, the double album that got it all started. It all adds up to some very impressive guitar work, electric and acoustic, and a barrage of percussion and trap drums. Good clear sound from Speaker’s Corner on 180-gram vinyl.