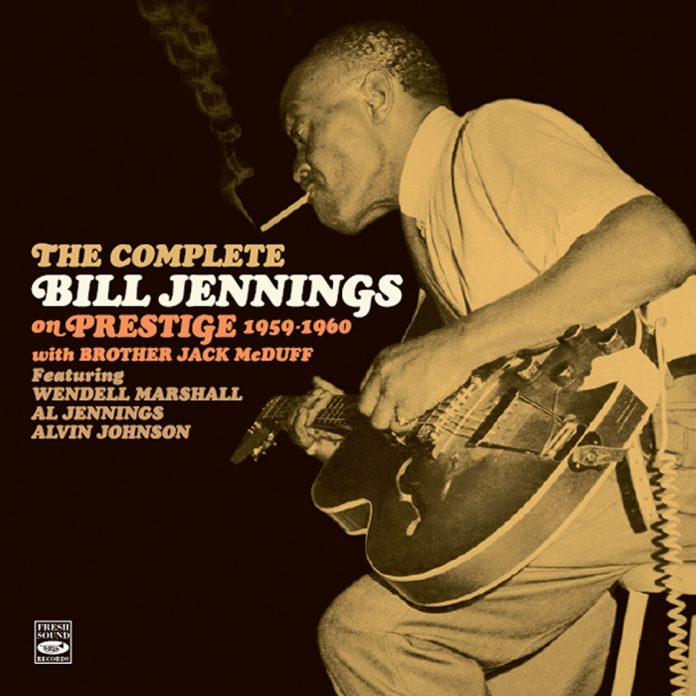 Jazz guitarist Bill Jennings is not a household name, even amongst jazz guitar enthusiasts like myself. Which is a pity, as the man had talent well beyond his limited fame. He was a left-handed guitarist, noted for playing a right-handed guitar upside down. In other words, high strings at the top and low strings at the bottom.

The reason for this appears to be that Jennings and his brother jointly owned their first ukulele and whilst his brother was right-handed, Bill had to adapt! That would have been a challenge for anyone but made more challenging by the loss of a finger later in his career.

Jennings only made two records as leader – Enough Said! and Glide On – both of which appear on this new single CD compilation from Fresh Sounds. Both were recorded at the Van Gelder’s Studio, New Jersey and the story goes that whilst setting up the studio, Rudy Gelder called out: “Say, who’s cutting?” Someone shouted, “Bill Jennings’s group!” “Enough said!” replied Rudy and the album was duly named.

Born in 1919 in Indianapolis, Jennings was a frustrated saxophonist, so much so that Charlie Parker, Herschel Evans, James Moody and Sonny Stitt are cited by Jennings as his major influences. Paradoxically, B.B. King is said to have cited Jennings as one of his biggest influences.

Jennings was able to ride the wave created by Charlie Christian’s liberation of the guitar from humble rhythm support to lead instrument and it wasn’t long before he got noticed for his warm and soulful style. In 1949 he played in the Louis Jordan Orchestra for approximately three years and subsequently recorded over 11 albums with the Willis Jackson Quartet. Ironically, his most famous recording was not a jazz record but Fever by Little Willlie John.

As was often the way, Jennings was spotted by an alert young A&R man and he got his break as leader with these two recordings with some fine accompaniment. The unmistakable (and possibly over enthusiastic) presence of Jack McDuff on organ caused Jennings to be labelled an organist’s guitarist, a term which he disliked, preferring, he said, to play like horns.

The two albums could not be said to be revolutionary. But they contain some cool, relaxed and right down-front guitar playing with more of a West Coast feel than you would normally expect from Van Gelder’s East Coast studio. Despite, Jennings’s own preference for reeds, there are none on either album. Maybe that is why he frequently gets his guitar-sound to approximate that of an alto sax.

This is a fabulous compilation which all jazz-guitar enthusiasts should appreciate. Whilst Jennings may never be mentioned in the same breath as Wes Montgomery, Kenny Burrell etc, this compilation should bring him some long overdue attention and recognition.

Barry Witherden - 26 January 2020
Apart from jazz my enthusiasms include silent films and Indian music, so this CD is something of a jamboree bag for me. A Throw Of Dice was the last...