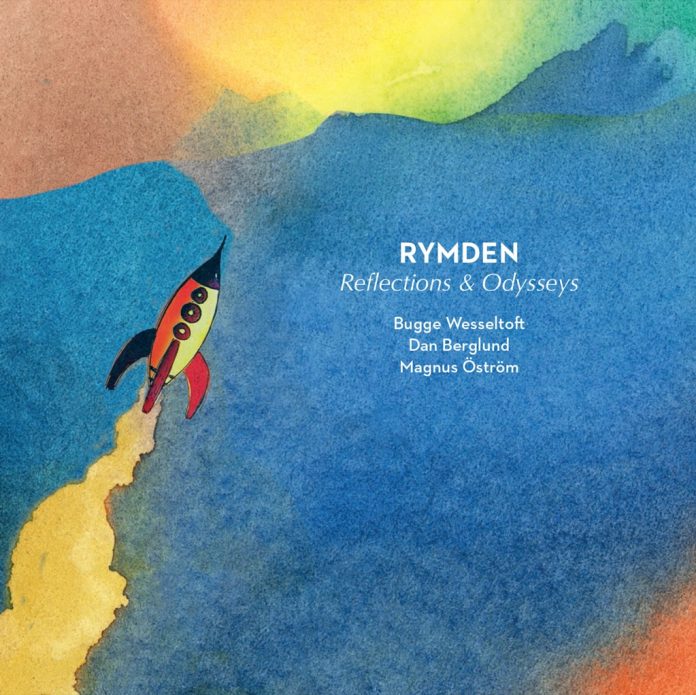 Whenever I stop to think about how E.S.T.’s music may have developed had Svensson’s life not ended prematurely in June 2008, I usually look towards the long form electro-acoustic music of Leucocyte (2008) and the posthumously released 301 (2012) for clues. The trio’s sound was hardening as musical forms loosened, but in the aftermath of the tragedy Svensson’s former bandmates Berglund and Öström chose to follow very different musical paths.

It wasn’t until a conversation in 2016 between Öström and Jazzland supremo Bugge Wesseltoft that another working piano trio became a distinct possibility, and after a public debut at Bergen’s Nattjazz Festival in February 2017, Rymden are on an unstoppable roll. Rymden translates from Swedish as “space”, and the somewhat futuristic nature of many of these soundscapes makes that an entirely apt choice of name.

I was fortunate enough to catch their imperious set at last year’s London Jazz Festival, and while this studio recording is relatively reined in by comparison, the music nevertheless bristles with energy. Following a brief rubato intro, Rymden – The Odyssey emerges in the most dramatic way imaginable. Öström’s percussive wall owes as much to Jaki Liebzeit as Elvin Jones, building a tension that Wesseltoft releases with a smouldering Tyner-esque flight. The pianist switches to Rhodes for the dangerous post-Headhunters funk of Pitter-Patter, and its stinging groove is as tight as it is deep.

Lugubrious Youth is the type of pensive chorale that Svensson returned to again and again, and along with Öström’s delicate Bergen and the floating Celestial Dog it finds Rymden at their most E.S.T.-like. Pivoting on Berglund’s muscular stop-start bass figure, Wesseltoft paints Råk with thickly saturated Rhodes tones. All too quickly the album is drawing to a close, the shimmering drone-based Orbiting segueing into Wesseltoft’s hymnal Homegrown, where the pianist adopts the hushed intensity of compatriot Tord Gustavsen.

Trace echoes of E.S.T. are almost inevitable given the distinctive musical personalities of Berglund and Öström, and while Rymden use broadly the same base ingredients of jazz, classical, folk, rock and electronic music, they conjure a distinctly different recipe. Experience the magic for yourself when the group visit the UK for a few dates in May – it already promises to be one of the jazz events of the year.