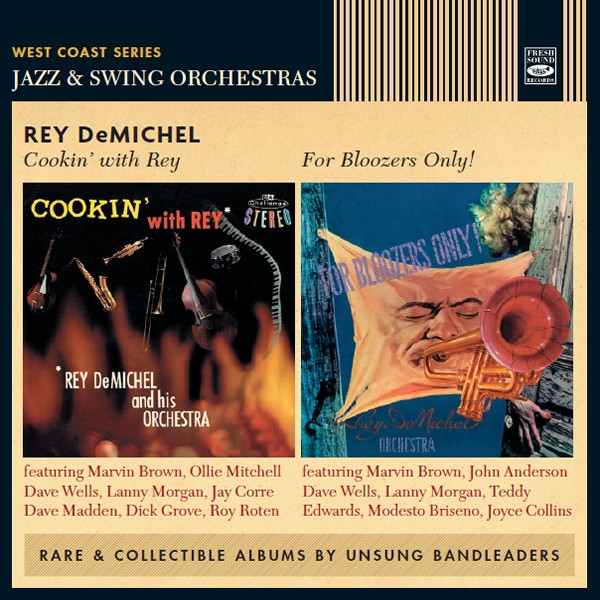 Another in Jordi Pujol’s interesting series of overlooked west-coast big bands from the 50s. He has already given us Tommy Alexander and Keith Williams on FSR CD965 (reviewed JJ 0918) together with Bill Hitz and Greig McRitchie on FSR CD 959 (JJ 0718).

This latest release features the work of Rey DeMichel, who recorded these albums for Challenge Records with arrangements by John De Foor and Kenny Farrer. Just like the other bandleaders in the series he assembled a number of performers who were to go on to work with name-bands like Bob Florence, Woody Herman, Charlie Barnet, Harry James, Buddy Rich and Maynard Ferguson.

The DeMichel band provides jazz-influenced dance music in the popular Les Brown tradition and just like Brown’s bands there is plenty of room for some excellent soloists: Lanny Morgan (“Deep Purple”, “When You’re Smiling”), Jay Corre (“Meet Rey”, “Continental”), Dave Wells (“Brahm’s Lullaby”, “How Long Has This Been Going On”) and Teddy Edwards (“A Rompin’ We Will Go”, “Twelve Bars High”).

I must also mention 20-year-old baritone-man Modesto Briseno who is heard on “Playmates”, where he steps out of the section for two choruses of hard-swinging excellence. I believe he died very young but another fine example of his work can be found on the Chamber Jazz Sextet’s 1958 Pal Joey recording (Candid ECCD 79030). Hats off, incidentally, to drummer Roy Roten whose accents and fills remind me of Frankie Capp.