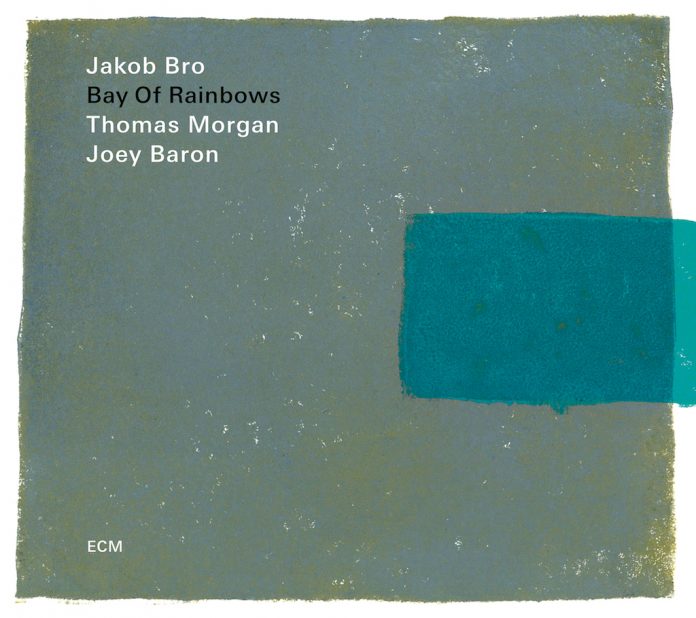 Despite just recently turning 40, Danish guitarist Jakob Bro seems to have been a fixture on the scene for several decades. With a pared-back and almost self-facing style that eschews superfluity, Bro made his ECM debut with the late Paul Motian in 2006. He then appeared on one of Tomas’s Stanko’s last great records Dark Eyes in 2009, before returning to the label in 2015 to pick up a burgeoning solo career.

He’s often compared to Bill Frisell, and the influence is undeniable; his working trio even includes two of the American’s favourite collaborators. But Bro’s music comes from a uniquely personal place, and while there are textural similarities the Dane doesn’t share Frisell’s distinctly Midwestern prism.

Bay of Rainbows is something of a first in Bro’s fledgling ECM discography, a live set. Recorded over two nights during an engagement at New York’s Jazz Standard in Summer 2017, his finely attuned trio revisit several pieces from an ever expanding portfolio of original compositions.

Bookended by two subtly contrasting versions of “Mild”, the pieces move with unpredictable cadence and often seem to form organically like steaming clouds of vapour. Lyricism is indelibly woven into Bro’s fabric, and other than during the explosive “Dugdrama” is conveyed though small low-key gestures. The two contrasting variations of “Mild” perfectly illustrate the extent to which Bro is happy for group improvisation to fill in the details of his sketchy compositional outlines.

We hope you’re enjoying this article, an example of the expert and compendious jazz journalism for which Jazz Journal is renowned. Will you – reader, artist, promoter – help sustain our work by donating?

“Red Hook” dates back to Bro’s time as a young musician paying his dues in New York, its title coming from the name of the district in Brooklyn that he once called home. Strangely it seems no more place-specific than “Copenhagen”, a piece from Bro’s ECM leadership debut Gefion. Driven more by internal moods than external stimuli, the trio’s muted palette traces amorphous shapes across a large expressionist canvas. “Evening Song” is one of Bro’s oldest pieces, one which has continually evolved as a result of having been performed on hundreds of stages around the world, and the version here is particularly beautiful.

While the trio’s introvert soundscapes may be a little claustrophobic for some listeners, I find the play between their contrasting and complementary voices both fascinating and authentic.

Brian Payne - 22 February 2022
This is the latest addition to the absorbing Jazz Goes Mod series from R&B Records. To clarify something which has confused a few, the series title is nothing to...

Jazz Journal - 30 January 2022
The first solid news of Miles' return to the scene was brought by singer Betty Carter earlier this year. But she bemoaned the fact that Davis had elected to...