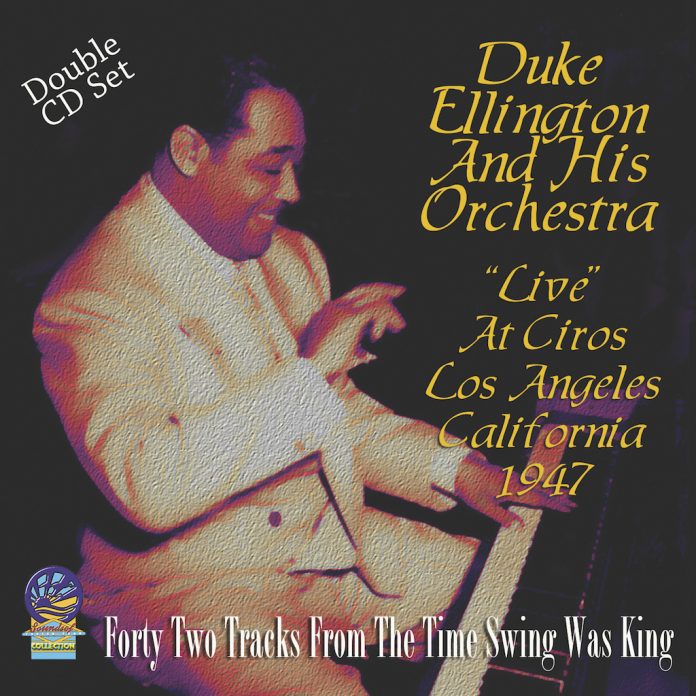 This is the kind of release which will delight dedicated Ellington collectors but cannot easily be recommended to others. There are eight different broadcasts here with two of the six dates shown each providing two separate programmes. They last about 15 minutes and come complete with their own announcements and opening and closing themes. (It should be noted however that not all such themes are brief; the shortest seven may all last less than a minute but “Beale St. Blues”, the longest, lasts over four minutes and six others last more than two minutes.) I believe it’s the first time any of these broadcasts have appeared on CD and the last two are not listed in the most exhaustive Ellington discography.

The main drawback for the listener seeking Ellington music of quality is the number of tracks (nine) featuring non-jazz vocalists Davis and Crumpler (a disappointing replacement for Al Hibbler) and they regrettably include a repeated song by each singer. Even without any singing a significant composition such as “Harlem Airshaft” is weakened by Harold Baker’s failure to match the previous contributions of Williams and Stewart, which emphasises the difference in solo potential between this section of five and the three trumpeters of the 30s.

However, Nance’s trumpet solos are always worthwhile and his vocal on “St. Louis Blues” is satisfying enough (though his repeated deliveries of the strange lyrics of “Tulip or Turnip” are less so). Similarly Hodges and Lawrence Brown can always be relied upon for quality and “Happy-Go-Lucky Local”, “Caravan”, ‘Stompy Jones” and “Royal Garden Blues” all receive spirited and rewarding performances.

The final broadcast is particularly interesting because the pieces announced as “Too Weary to Worry” and “Flirtation” are seemingly the first surviving performances of “Lady of the Lavender Mist” and “H’ya Sue”, which were recorded as such in the Columbia studios a couple of weeks later. For the serious student of Ellingtonia that makes this rather surprising release from Sounds Of Yesteryear even more appealing.

Hugh Rainey - 02 February 2020
Chris recently announced his retirement, well earned after 70+ years of playing and band leading. This reissued two-CD album, originally put together in 2010, is a tribute to his...